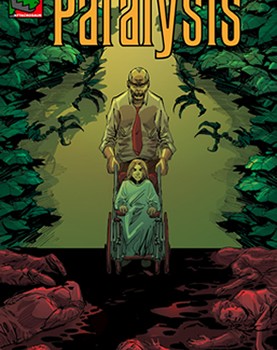 Paralysis is the first book by Martin Ian Smith and J.C. Grande under Smith’s Attackosaur Comics. Set in 1942 London, it’s a gruesome little standalone tale that flitters between psychological thriller, creature feature and wartime romance… well, maybe a little less of the latter than the first two. Dr Harper is a detached, soulless man whose life is consumed by research into a cure for his comatose daughter Rosemary. As the ferocity of the German air raids increases, Harper has been desperately conducting sickening experiments, willing to sacrifice the lives of strangers at the possibility of saving his child.

Paralysis would feel at home in a ghoulish E.C. Comics inspired anthology, or equally as an episode of the Twilight Zone. The book’s ending is ambiguous to say the least, which some people may have a problem with. But not me. This is that (now) rare variety of horror whose formless terrors linger uncomfortably in a far corner of the reader’s imagination, and Smith prevents the story’s tension from deflating by forbidding us the usual pre-climax burgeoning of exposition. It’s the sort of ominous short story that Ray Bradbury once excelled at.

I particularly enjoyed the book’s 40s setting. Other than London’s Dark by James Robinson I can’t recall any other comic set in war-torn London. Grande’s monochromic art suits both the tone and the era perfectly, which is probably far trickier than it looks; the illustrations in period comics are often too modern and glossy to effective convey bleaker times.

Though the Nazi bombings don’t play a major part in the plot, they forever linger in the background, emphasising the impending end to Harper’s research, and almost allowing him to justify the atrocities he carries out in the name of science. Is there any length to which a man will not go when the world around him is perceivably at an end? The final two pages are especially striking in their simplicity, giving Paralysis a context that resonates long after you’ve returned to the present.
8/10

Paralysis is available from Attackosaur.com for a trivial £1.50 (plus 50p flat rate for postage to anywhere). 28 pages, B/W. The site also features several other webcomics and some short film projects. Oh, and a city-stomping Tyrannosaurus Rex with a jet pack… which is quite possibly about as cool as anything gets.