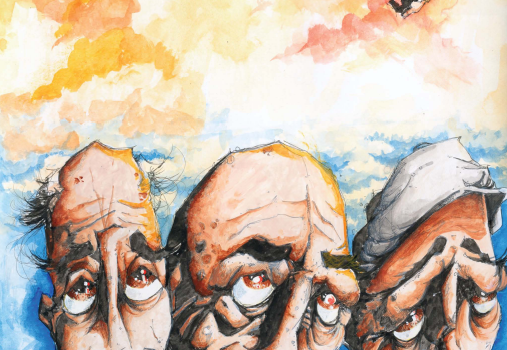 From the skewed mind of Sean Dietrich (Industriacide, Fervor) comes Catalepsy, a short but sweet tale of aeroplanes, alcoholism and afterlife. To divulge much of its plot, or indeed compare it to Adrian Lyne’s classic 90s psychological thriller with which it share its central concept, would be to nosedive recklessly into spoiler territory.

But Catalepsy isn’t really about plot. Instead Dietrich takes us on a surreal trip through WWII pilot Otto’s booze-soaked hell; a hell inhabited by twisted physiognomies and lost souls desperate to share their own tragedies. After flushing himself out of an airplane toilet, Otto lands miraculously in a bartown reminiscent of New Orleans, where every stranger he meets takes a gun to their mouth and pulls the trigger. It’s obvious where this story is heading from the offset, but Dietrich’s narrative is more focused on the journey than the destination. Dietrich’s illustrations reveal shades of Sam Keith and Bill Plympton, but his style is entirely his own. His art has an fragmentary, immediate quality to it, that sets Catalepsy apart from pretty much every other comic I can think of.

Yes, this has been a vague, directionless review, but there’s not an awful lot that can be said about Catalepsy. I appreciated it for its whimsical style and tortured characters, even if the story itself (coming in at a mere 27 pages) ultimately doesn’t pack an awful lot of substance. Dietrich is an inimitable creator, one whose comic work will likely never sell to the mainstream, but over time earn itself a devoted fanbase. A brief glance at his beautifully macabre paintings over on deviantArt should be more than enough to encourage you to join the latter camp.