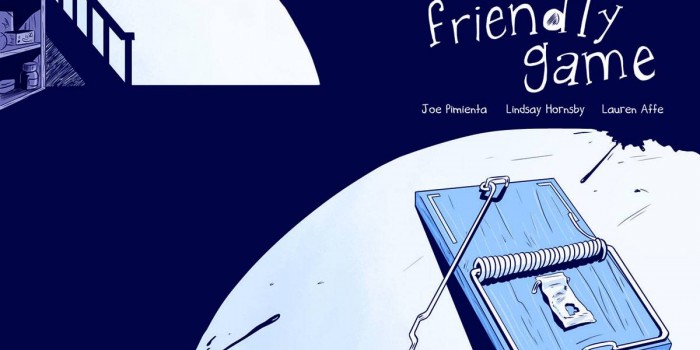 As anyone who suffered a speech impediment, thick spectacles, tentacles-for-arms or any other physical distinction at school will attest, children can be evil little bastards. But few are as demented as A Friendly Game’s central rascals Todd and Kevin, whose afternoon-passing games take a sickening turn after they find and dissect a dead mouse caught in a trap.

What started as a one-off act of morbid curiosity soon becomes an obsession, with the boys entering a game of one-upmanship, escalating their prey from rodents to small mammals and finally a puppy – the last of which causes Kevin to quit. Todd, however, sees Kevin’s retraction as a need to take the game to the next level, raising the stakes even higher.

Slave Labor Graphics are keen to promote A Friendly Game as No Country for Old Men with kids, but it’s far closer in tone to River’s Edge, Funny Games or Mean Creek. This is a study of adolescence sociopaths who possess the same capacity for evil as adults, despite their diminutive stature. A Friendly Game is the first graphic novel by Joe Pimienta and Lindsay Hornsby, whose writing/art duties appear to be so intertwined that I won’t even attempt to distinguish them. It’s a finely illustrated book, and in spite of the b&w manga-esque presentation and wide-eyed characters, Pimienta/Hornsby paint a pretty intimate picture of small-town America.

The central problem with A Friendly Game, however, is that it lacks a full first act. The boys’ initial animal mutilations occur just a few pages in, providing little space for psychological insight or moral dilemma. The book’s most interesting concept; that the more moral Kevin actually initiated the game and feels responsible for turning Todd into a monster, is also never fully explored.

But these shortcomings aside, there’s a lot to admire about A Friendly Game, and I’d like to see what Joe Pimienta and Lindsay Hornsby come up with next. I should perhaps add that while the book depicts scenes of animal cruelty, Pimienta and Hornsby never indulge that sense of fetishism that modern horror movies do; it’s never implied that Kevin and Todd’s games are anything but the work of a twisted, deplorable mentality. A shame, then, that the book doesn’t attempt to delve beyond the surface of such a mindset.