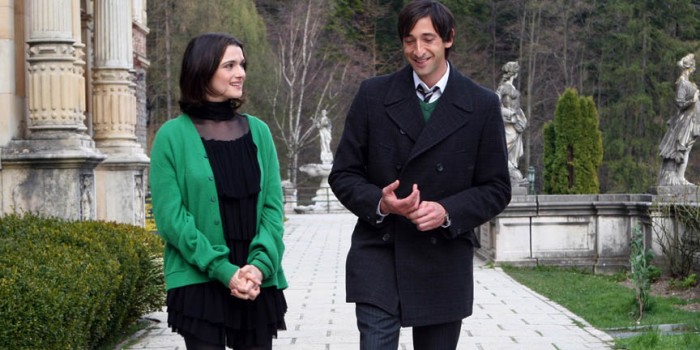 You have to admire writer/director Rian Johnson’s propensity for overreaching. His first movie, Brick, was a high school murder mystery which channelled the noir sensibilities of Hammett and Chandler, and even if its askew wit resulted in something more Bugsy Malone than Veronica Mars, it was an impressive debut nevertheless. The Brothers Bloom, Johnson’s follow-up, may be as stylistically different from Brick as is possible, but shares that film’s aching overindulgence. There’s a lot to enjoy in this quirky tale of two romanticised con artists, but like its titular fraudsters The Brothers Bloom is coated with thick veneer of undeserved smugness.

In Pushing Daisies fairytale flashback fashion, the film introduces us to the childhood incarnations of brothers Bloom (soon to grow into Adrien Brody) and Stephen (likewise Mark Ruffalo), unwanted urchins who have only one another to depend on. After witnessing the elaborate but rewarding prank that sets their mischief in motion, we are whisked into the present where the brothers have practically become celebrity confidence men. Stephen concocts intricate stories in the search for the perfect con where “everyone gets what they want,” while blank slate Bloom yearns to live a life not written by his more resourceful brother. Rachel Weisz and Adrien Brody in The Brothers Bloom

As with almost every caper movie ever made, The Brothers Bloom follows the final adventure of Bloom and Stephen, which banks on Bloom charming eccentric New Jersey heiress Penelope (Rachel Weisz). The plan is to exploit her impulsive nature, integrating her into a book smuggling escapade that takes the group from Greece to Athens to Prague to Mexico to St. Petersburg. All while showcasing more hats than the Royal Ascot.

There’s an old school charm to the second half of Johnson’s globe-trotting adventure, as Weisz’s wide-eyed millionaire becomes increasingly embroiled in a crime too idealistic to possibly exist, and Brody’s moody Romeo predictably doubts whether his love for her is simply an act. Wiesz holds the film together – indeed, it’s not until her character appears that the movie becomes remotely involving – with a level of enthusiasm that’s sorely lacking in Brody and Ruffalo’s romanticised criminals. A muted Rinko Kikuchi (Babel), as is the duo’s explosive expert, at times brings the film down to a level of cartoonish farce, while Robbie Coltrane’s faux Belgian is enjoyable but underutilised.

The Brothers Bloom is an uneven ride. The central characters are difficult to like, the “big con” isn’t nearly elaborate enough, and the final twist doesn’t provide satisfactory closure. Yet it’s still a likeable enough movie, if never anything more. Rian Johnson clearly has it in him to make a truly great film, but his first two efforts have both tried so hard to defy genre that they are, while easy to appreciate, difficult to love. The Brothers Bloom may have the wit and whimsy of Wes Anderson’s finest, but it lacks the heart.

Extras: A fairly intimate making-of featurette, an excellent interview with Rian Johnson, deleted scenes with commentary and a trailer.