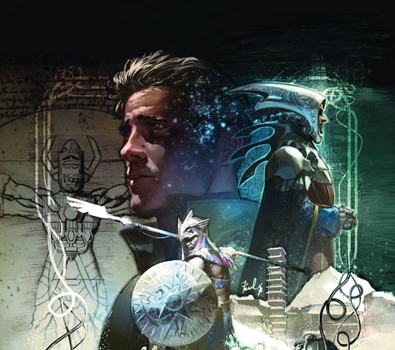 In S.H.I.E.L.D., Jonathon Hickman (Fantastic Four, Secret Warriors) has come up with one of those ideas so darn brilliant, you can’t help but wonder how nobody else came up with it earlier. This is S.H.I.E.L.D. through the ages; from Egypt, 2620 BC, to Renaissance Italy to 50s New York, spanning time and space in just its first issue. Yes, the S.H.I.E.L.D. we know and occasionally love is revealed to be a millennia-old organization charged with defending Earth from every variety of Armageddon imaginable. If you’ve ever wondered why every alien race seemed to first attack Earth in the sixties, Hickman shows us that Imhotep actually saved humanity from the Brood (alongside Apocalypse and an earlier incarnation of Moon Knight), and Gallileo’s genius devised a weapon to combat the planet devourer Galactus long before Reed Richards was even born.

At the centre of this epic tale is 50s “everyman” Leonid, who is inducted into the secret society by two G-men, where in the submerged Immortal City he’s brought up to date by S.H.I.E.L.D.’s High Council. Leonid is currently the weak link in this series; his uniquely rendered shadow and the deal with his super villain father, the Night Machine, will definitely need to be delved into over the next issues or two. But the rest of this issue is so imaginative and fully realised that Leonid’s current role as an exposition magnet is entirely forgivable.

Justin Weaver’s art is often beautiful, full of intricate establishing scenes and detailed panoramas. It’s testament to Weaver’s talent that while the story furiously hops back and forth through time, every foreign landscape and historical figure is immediately recognisable. Some of the pages you just want to cut out and frame (not that I’d endorse the destruction of said comic book, of course); Zhang Heng facing up to a Celestial and Galactus towering above 16th Century Rome being the most memorable moments.

S.H.I.E.L.D. is the most exciting title Marvel has released in some time. It’s completely and utter ridiculous, but executes its genuinely brilliant concept so well that you’ll be mesmerised several pages in. Throughout this issue I was reminded of Warren Ellis at his finest; ‘The Resurrection of Leonardo da Vinci’ is so densely packed with wit, references and original ideas that I had to immediately reread the issue just to take it all in.