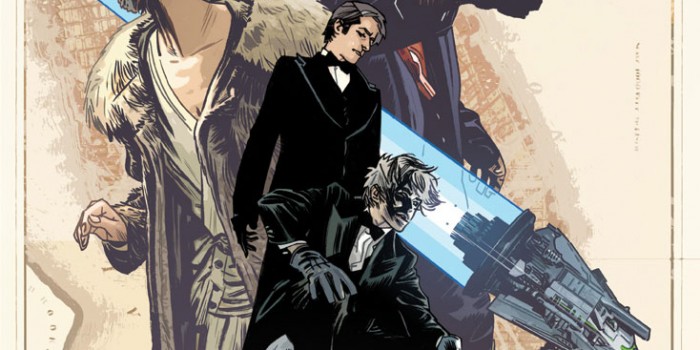 American audiences (as the majority who visit this site are) might not recognise the name Jonathan Ross, but to us Brits he’s a TV presenter adored and reviled in equal measure. A paradoxical, flamboyant man-child who’s arrogant yet self-derivative, power hungry but always genuine, he’s usually most entertaining in small doses. Ross is also a self-proclaimed geek and a notable comic book collector, and the husband of scribe Jane Goldman, the co-writer of the Stardust and Kick-Ass movie adaptations. Naturally, being a big comic nerd doesn’t automatically make Ross a worthy comic writer, but after reading the first issue of his debut Turf, I’d say he’d be foolish not to write more when his time with the BBC ends… though the money probably won’t be so good.

‘The Fangs of New York’ depicts an alternate 1920s New York complete with such noir staples as feuding gangsters, corrupt cops and a budding investigative reporter. Tipping the plot into the fantastical is Gregori Dragonmir, a vampire lord bent on ruling the city. We also get a brief glimpse of an alien spaceship that’s also heading towards the big Apple. Yup, it’s Gangsters vs. Aliens vs. Vampires. But while Turf is absolutely a hodgepodge of various fantasy genres and Prohibition era gangster movie clichés, Ross’s writing just about holds it all together.

The first impression anyone who picks this issue up will get is how wordy it is. Seriously, outside of some of Alan Moore’s densest work I don’t think I’ve ever seen so many words crammed into one page. Much of the heavy narration could have been cut out entirely without compromising a thing. But at least you won’t flick through #1 in under ten minutes.

Tommy Lee Edwards’ visuals are smothered by the script, but he’s nevertheless managed to improve upon his meticulous work on Marvel 1985. There’s a real sense of decay in Edwards’ New York, and he manages to illustrate Turf’s contradictory components in a style that is wholly consistent; be it a crime scene, an intergalactic dogfight or a posse of well-groomed vampiric gentlemen taking to the skies. I have a terrible habit of crediting every book’s success to its writers, but Edwards is the glue that binds this conflicted world together.

A hell of a lot of characters and plot elements were introduced in ‘The Fangs of New York’, and the end result is an overwhelming debut that concentrates on setting up its premise at the expense of characterisation. But if Jonathan Ross can give us a reason to care about his protagonists then Turf has the potential to become much more than the sum of its derivative parts.