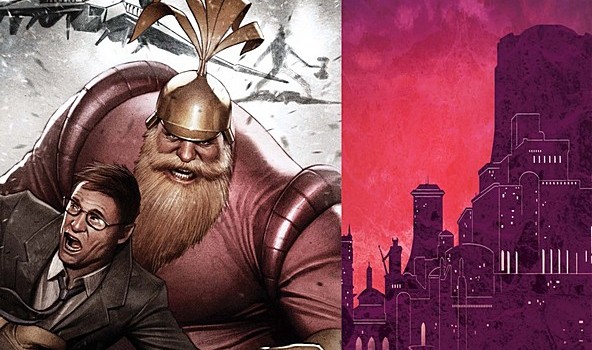 While the Civil War crossover event a few years back turned out to be a big fuss over nothing, one of several highlights was the Front Line miniseries, which detailed the unfolding events post-Stamford from journalist Ben Urich’s perspective. And with Siege looking to be a similarly empty affair, it’s comforting to find that the new Urich side-series Siege: Embedded is just as entertaining as Front Line was. Brian Reed has so far made this series everything it should be. Firstly, he makes it clear that despite the presence of Asgard in the MU’s USA, Siege is happening in a world very similar to ours, providing some crude (but undeniably funny) satire along the way. The scenes with right-wing bastard Glen Beck – oops, I mean Todd Keller – are fantastic, as is Urich’s “interview” with an ignorant gas station assistant.

Secondly, by viewing Norman’s assault on Asgard from the perspective of two inconsequently mortals, Reed endows Embedded with a real sense of futility. We know that Captain America will rise from the dead, that Iron Man will get the opportunity to redeem himself, but Urich and cameraman Will Stern are granted no such destiny.

And lastly, this issue is just fun. Volstagg has always been a comical character, but Reed makes him a proud yet loveable buffoon who is too single-minded to quite appreciate the consequences his actions will have. Of course, it doesn’t hurt that both the art by the talented Chris Samnee and Matthew Wilson’s gaudy colours are perfectly suited to this title.

Unfortunately, after a brief tussle with some H.A.M.M.E.R. goons, Siege: Embedded is looking to take a slightly darker direction next issue. Which is a bit of shame, as I’d have happily read an entire series focussing on this unlikely trio’s road trip. ‘Urich, Stern and Volstagg Across America’… How about it, Marvel?