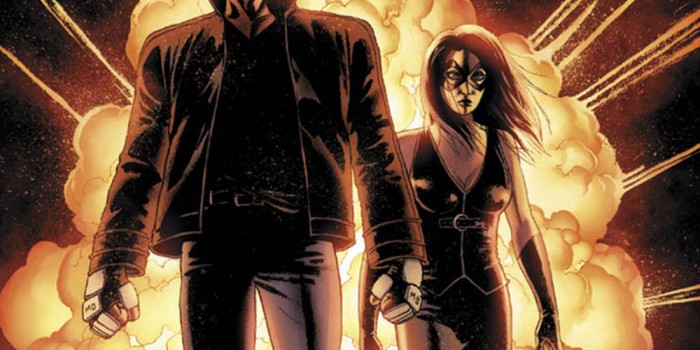 The above oversimplification isn’t intended to demean Incorruptible by any means. Waid is intentionally playing with the flipside of his engrossing Boom! effort by setting this new series within the same universe. As the Plutonian continues to destroy that little green and blue ball we call earth, invulnerable thug Max Damage has taken it upon himself to take the rogue superman down. Or so it appears.

As with the Plutonian, Damage’s motive for this sudden change of heart is unknown, and is by far the book’s most effective hook. One minute Max is a sadistic murderer, terrorist and all-round rugged rascal, the next he’s turning on his henchmen, incinerating the contents of his underground vault and refusing the advances of his underage girlfriend/sidekick, the naughtily monikered Jailbait (who in true comic book fashion is still depicted with the buxom figure of an adult woman).

The inconstant illustrations by Jean Diaz are the only area letting this new series down so far, with Max Damage appearing like a different person in the same unimaginative costume from one panel to the next. For a 28-30 year-old he’s also peculiarly grey-haired and haggard looking. Andrew Brabo’s colours bring the best out of the substandard art, and overall it’s hardly an ugly title, but as a companion piece to one of the most exciting series currently on the shelf, Incorruptible deserves better.

Whereas Irredeemable introduced us to a large cast of superhumans in the first issue, Incorruptible is far smaller in scale; the only other person of importance we meet is Lieutenant Van Armadale, a potentially crooked cop who Damage has enlisted to help him go straight. Irredeemable took a few issues to get truly interesting, and Incorruptible has begun in a similarly unimposing fashion – not an awful lot happens in this issue, but the ever-reliable Mark Waid has set solid groundwork for what could be another fascinating twist on the cape genre.