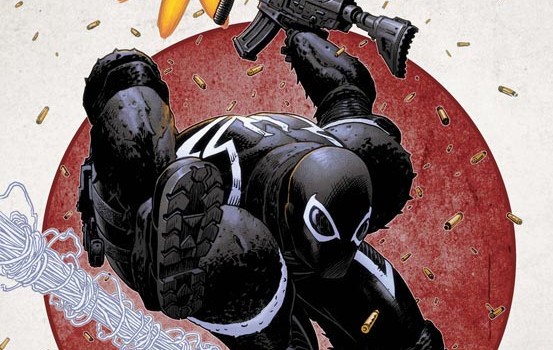 With Mac Gargan no longer hosting the symbiote, there’s a certain desperation in the way Marvel have been so quick to reinvent Spider-man’s erstwhile antithesis. Flash Thompson, the former Peter Parker bully turned paraplegic war hero, is now in the black; a covert killing machine with a conscience. Venom is one of a slew of iconic 80s/90s characters that proved iconic enough to capture readers’ imagination, but never had the depth to substantiate an ongoing series. Remender has proven with Fear Agent and his recent Punisher run that he can sustain non-stop action, but Flash Thompson’s Venom is a more three-dimensional hero than one might presume, and the juxtaposition between his near-onipotent alter ego and wheelchair-bound alcoholic civilian existence has a lot of potential. An interesting plot device is provided in the 48 hour time limit applied to Flash’s time within the perambulation enabling suit. Any longer and the suit will permanently bond to him, triggering a kill switch implanted by his superiors.

A fair bit to enjoy in this new Venom, then, and while the debut’s plot, a battle with Jack O’Lantern over a terrorist weapon-maker in Eastern Europe, was nothing groundbreaking, Tony Moore’s energetic pencils are always a joy. Remender should be commended for attempting to make this exhausted cash cow relatable, flawed and very human.