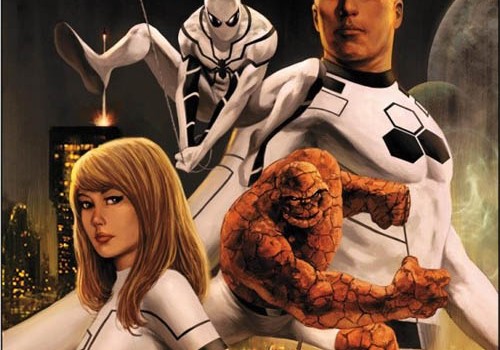 Given the publicity and teaser images preceding its debut, you’d be forgiven for thinking that this Fantastic Four reboot would start afresh with Marvel’s first family, now sans the recently deceased Human Torch. Instead, Jonathan Hickman’s Future Foundation is an extension of the Four, incorporating practically everyone associated with the Richards clan, including littluns Franklin and Valeria, Spider-man and Reeds long-lost, time travelling father. A familiar foe also appears to be join the FF’s ranks, though his affiliation is likely to be temporary. Other than the omnipresent webhead’s inclusion – implemented by Hickman as a way of introducing newcomers to the team and series – and some eye-catching (if slightly soulless) monochromic costumes, this is business as usual for the FF. A relief for long-term readers, perhaps, and you have to wonder why Marvel didn’t just slap a brand spanking new logo onto the cover of #589. Johnny Storm’s death resonates throughout this issue, from the reserved banter between Spidey and a melancholy Thing to a touching dinner table scene which showcases Hickman’s ability to balance outlandish ideas and plausible characters.

Every reboot needs an old school villain, and those dastardly rascals at A.I.M. have freed the Master, but Steve Epting illustrates the issue’s calmer moments with the same proficiency as he does the Future Foundation’s brief first undertaking. Hickman has wisely held back on the action here, crafting an intimate debut that, rather than reinvent Fantastic Four, serves as a gentle reminder of how good the longstanding series could be.