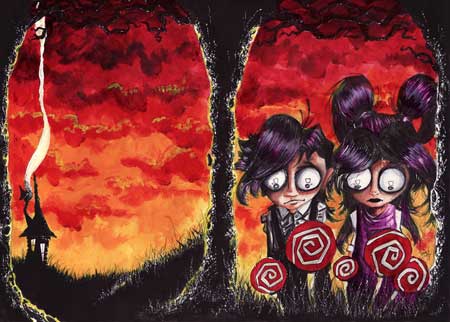 Press Release: Sean Dietrich, the San Diego live painter who has racked up almost 900 live art shows up and down the west coast, brings his 2011 Art Tour to San Francisco this weekend for the WonderCon comic and pop culture convention.

Dietrich, who will be at booth SP60, will be selling and signing copies of his new books ‘I Brought the Gutter’, ‘Bubbles from Atlantis’,  limited edition prints, and original artwork, as well as doing custom sketches for convention attendees.  Patrons of the booth will be also treated to information on how to win an original painting valued at over $1000. Best known for his live painting shows in San Diego, CA where he has cut open a girl to give birth to a ‘pig baby’, and hired a 350lb man to sit with his face in a plate of pasta to recreate the gluttony killing from the movie ‘se7en’, Dietrich is offering his latest artistic rituals in literary form;  Bubbles from Atlantis, from award winning New Orleans journalist Richard A. Webster (Dietrich illustrations), tells of the first year of his existence after Katrina devastates the city.  The Fruits of Our Labor a tale spun by newcomers Rachel Andrews and Lexi Sadler, is a children’s book that Dietrich illustrates, telling the tale of Xander who finds out what he can be when he grows up as he plunges into plates and plates of healthy fruits and veggies. The book is alphabet style and will have your children holding onto your pant leg begging not to leave the produce section of your local grocer. Finally, after two and a half years Dietrich returns to the helm as writer and artist in his opus I Brought the Gutter, a 180pg compendium collecting the best from 10 years of art from over 800 live art shows, accompanied by stories of the clubs, the art, the drink and the state of the San Diego art scene. You’ve never read an account of what it really is to be one of the most innovative artists in the child city on the ocean, spending sometimes six nights a week in the depths of bars and nightclubs smearing his craft across the amazed and shocked faces of the patrons.  All books will be released through Colosseum Publishing.

The artist/writer will be available for interviews at the convention, or feel free to contact him through the outlets above to schedule any press. For an e-copy of his latest book please log onto www.industriacide.com/press-kit.html.  Sean Dietrich currently lives in San Diego, CA and can be found painting live weekly at various clubs around town.