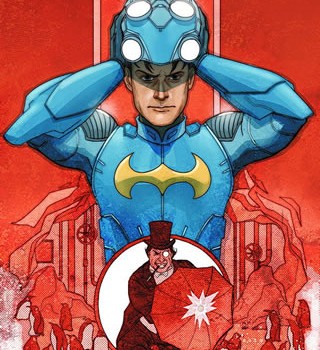 This new miniseries is an attempt to spotlight the latest generation of DC heroes in a similar fashion to The Brave and the Bold’s team-ups. On the one hand, World’s Finest makes a welcome return to the more traditional, one-off plots that have been eschewed in favour of trade paperback worthy epics. But on the other, neither Red Robin nor Nightwing are particularly intriguing characters. Tim Drake in particular has gone from being the most likeable Robin ever to a tiresomely moody bastard, and his ill-suited new persona isn’t really worthy of one dedicated comic a month, let alone two. The new Nightwing is Chris Kent, son of General Zod and adopted son of Superman – Dick Grayson took the title from a historical Kryponian hero. Likewise, he’s a dull creation with a cool costume, and if you know little about the character Worlds’ Finest #1 is unlikely to make you want to change that.

The plot itself, which sees Red Robin and Nightwing join forces to rescue Flamebird from a Kryptonite Man-assisted Penguin, has its moments, even if the final two pages are far more intriguing than the preceding twenty. Overall, this is an issue that can best be described as competent. Gate’s writing is hardly original but does the job, and the same can be said of Julian Lopez’s enjoyable but indistinguishable art.

World’s Finest is a decent enough primer for anyone who’s been missed out on recent happenings in the DC Universe, but is hard to recommend amongst so many superior titles.