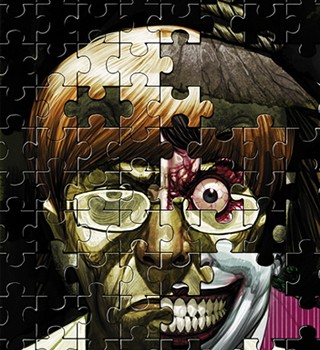 While the Batman: Battle for the Cowl event pretty much failed to deliver on its every promise, the one pleasant surprise to come from it was David Hine and Jeremy Haun’s Arkham Asylum one-shot. Engrossing and ominous, it oozed with a Lovecraftian style of ambiguity and added some intriguing new nutjobs to Gotham’s already bountiful supply. Hine has a knack for dormant horror; while nothing bad happened in that one-shot, we got the distinct feeling that something will. Well, the team have returned for this 3-part miniseries, which is so good you can’t help but wonder if the basic concept and cast couldn’t have held a regular run. Commencing with the opening of the new asylum, ‘The Raggedy Man’ focuses on both Jeremiah Arkham’s doomed efforts to maintain his Uncle Amadeus’s “dream” and the shady goings-on from his new assistant director Alyce Sinner, the child survivor of a Heaven’s Gate inspired ritual suicide.

Arkham Reborn has also been wonderfully timed, with Hine managing to incorporate numerous elements seen in the recent Batman: Arkham Asylum video game to great effect. Presumably most readers will have played that game, and be familiar with the bad blood between Aaron Cash and Killer Croc, as well as Amadeus Arkham’s sinister agenda for Gotham’s mentally ill. Throw the Black Mask, Clayface and the impostor Bruce Wayne into the mix, and you’ve a fine mix of familiar and new players that prevent Arkham Reborn from ever feeling like a stale cash-in.

Jeremiah’s ‘three beauties’ from the previous special, Hamburger Lady, Mirror Man and No-Face make a far too brief appearance, but I dare say we’ll see more of them in the following months. They’re a fascinating trio; though whether they prove to be Arkham’s folly or its saviour remains to be seen.