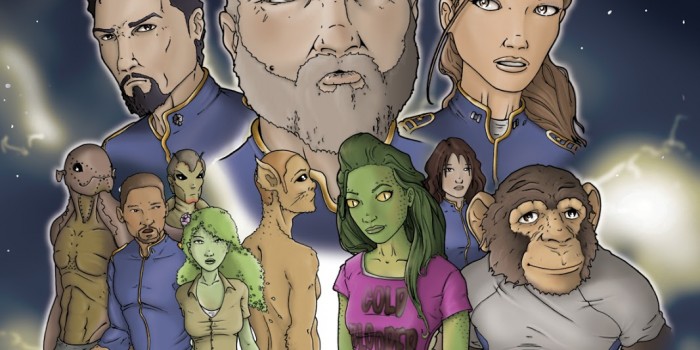 Had Star Trek been alive, well and on television in the 70s, the era of Silent Running and Solaris,  it may very well have resembled ARK, a sci-fi series following a crew of humans and meta-humans travelling beyond our galaxy in search of another habitable planet.

After 13 years aboard the Explorer, relationships between human crew and meta-human passengers (human/animal hybrids with unique, X-Men styled abilities) are expectedly tense, and are pushed beyond breaking point when communications with Earth are inexplicably cut. When a secret message from Earth is discovered, and a crewmember conveniently disappears out of an airlock, the truth behind the Explorer’s design threatens to turn the already volatile crew against one another. …and I’ve just made ARK sound a lot less interesting than it actually is. But then I must admit that I didn’t go into ARK with particularly high expectations. At first glance, Ryan Bayliss’s artwork seems a bit off, with the characters often captured with comically contorted facial expressions, and the ships and uniform designs resembling a dozen other similar science fiction works. But his clinical setting and affectionately illustrated array of relatable misfits soon charmed me, and I found myself liking… no, loving, this book.

Peter Dabbene’s 140-page script manages to introduce a large cast of characters, provide the necessary pseudo-scientific exposition, and set up this “pilot episode” with no shortage of ethical dilemma or philosophical discourse. The Explorer’s crew are diverse and all surprisingly sympathetic; the meta-humans have every right to resent the ship’s human officers, while Captain Smith’s abhorrent actions are, as with all tragedies, the result of good intentions.

As with the best sci-fi serials, ARK manages to take familiar genre conventions and use them in a way that doesn’t feel at all clichéd. It’s a comic that isn’t afraid to kill its most likable characters, and ends on a sombre but strangely beautiful note.

Apparently there are plans to publish two more volumes in the series, and I’m excited to see where Dabbene and Bayliss take the series now that the premise has been firmly established. Sci-fi fans lamenting the fact that there’s not likely to be anything like Star Trek, Stargate or Babylon 5 on our screens anytime soon owe it to themselves to check ARK out.

ARK is available now from comiXology, priced $4.99. A printed edition is planned for this September.