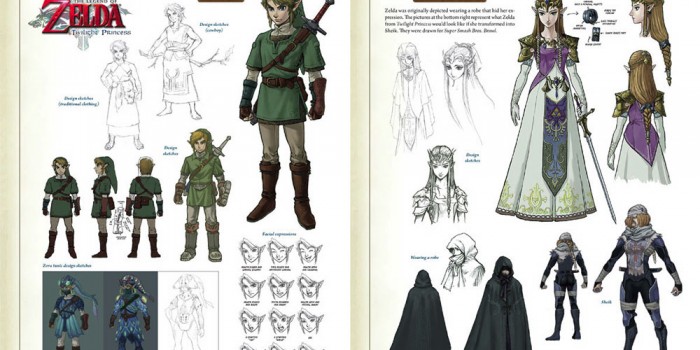 If any game deserves a comic to showcase the unique artwork of its world then it has to be the Legend of Zelda series. A fan favourite for years, Zelda has sold more than sixty million copies across nine separate platforms, making it one of the most popular series ever made. The Hyrule Historia presents an encyclopaedia of the series that is more than an A-Z of the Zelda world, but also explains how the series developed into a distinctive artistic concept. Ever since I unwrapped my Nintendo 64 on Christmas day sixteen years ago I’ve lost countless hours exploring Hyrule. The setting is an absolute delight to wander round; it’s full of magic and wonder, and the only thing that upsets me is when I get to the end of the game. That is why I was excited when I heard there was going to be a graphic novel. It was a chance to learn even more about the world that I have spent so much time in, and I hoped it would give me some insight into how it was made.

Hyrule Historia definitely delivers on this – the magic and wonder of Hyrule is brilliantly presented by the style that the Historia takes, and it is written with the fan – and enthusiast – in mind, explaining the entire timeline of the entire story from beginning to end. This is no mean feat for a series that has now reached fifteen titles. The book tends to focus on the more recent titles, so those too young to have had the opportunity to play earlier games may be lost in some of it. If, however, they want to learn the origins of the Zelda story and what inspired the roots of the series, they can see the artwork of some of the older games in a mesmerizingly beautiful way. Hyrule Historia will make you want to go to a garage sale and buy a SNES.

Guided from the beginning by an enlightening preface from producer-legend Shigeru Miyamoto, over 276 pages the reader is told the story through the art of the series. The beauty of this book lies in the incredible attention to detail, with intricate artwork often containing hidden references to the games that you’ll have a blast trying to spot. Incorporated into the Hyrule Historia is a unique Zelda Manga edition which, for a game that embodies the best of Japanese graphic artwork, presents a stunning mould of the genres that any fan will enjoy. As an overall accompaniment to an iconic game, unlike many other game-book tie ins, this really breaks the mould in presenting a legendary series as a true artwork, and is an interesting new development in the popular appreciation of such stylish, graphic art. I’d be surprised if we didn’t see some other franchises follow suit. Maybe soon we’ll see Final Fantasy VII – the Midgar Historia, and then my life will be complete.

Ian is currently counting down his top 100 graphic novels over at www.top100graphicnovels.com.