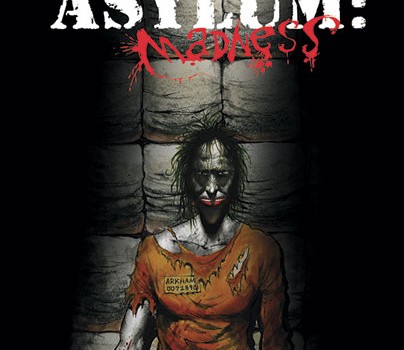 Sam Keith is one of those inimitable creators whose work only really approaches brilliance when he both writes and illustrates a book. Often his artwork feels misplaced, such as it was in the early issues of Neil Gaiman’s Sandman or many of his mainstream superhero efforts, but when Keith is given free reign the result is always bizarre and often magnificent. Read The Maxx and Zero Girl, and the go find me another comic series that is even remotely similar to either. Given that Keith’s art often resembles the deranged scrawlings of a lunatic, he’s clearly the right man for a 97-page graphic novel following the doctors, nurses and security guards at Arkham. So often in the Batman titles the asylum personnel are purely victims in waiting, and it’s a novel perspective to take. Outside of the inmates you might expect (Joker, Two-face, Poison Ivy, Killer Croc) there’s little in Madness to remind you that these characters exist in the same world as Superman and Green Lantern. Refreshingly, Batman doesn’t make an appearance either.

Keith puts his players through an especially slow and tortuous wringer. A 24-style digital clock follows timid mother Sabine through a day-long shift, which she’s forced into after a co-worker is fired for on-the-job fornication. For the first two thirds of Madness, this device works incredibly well, with Keith cranking up the tension until, as the clock approaches midnight, the prisoners aren’t the only ones losing their sanity. Though if it’s regular practice for Arkham’s staff to literally work around the clock, then there’s no wonder Harleen Quinzel decided to join the psychopaths.

Little details such as a broken clock that is inexplicably dripping blood and Arkham’s relocation to an ethereal, barren landscape (which has a definite hint of The Maxx’s outback about it) reinforce the slow-burning Lovecraftian menace. But sadly, the 70-odd pages of build up don’t quite reach a satisfying climax, with several running themes materialising into nothing more than half-baked ideas. Like a cheap slasher flick, Arkham Asylum is engrossing while you’re reading it, but as you hit the final pages there’s only a sense of pointlessness awaiting you.

I’ve yet to mention Sam Keith’s art, which is as demented as usual, possibly more so, and owes a lot to Michelle Madsen and Dave Stewart’s equally madcap colours. Keith shifts between styles with a frequency that would be off-putting in any other book, but with Arkham Asylum: Madness his unpredictability has found its home.