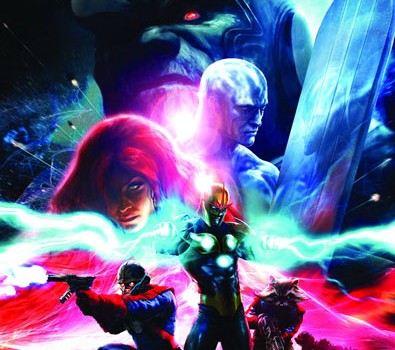 Ever since he casually wiped out Marvel’s finest in Infinite Gauntlet, Thanos has sat amongst the top tier of super villains. Though unlike Doctor Doom or Magneto, Thanos has not been so overused that he’s lost his impact, and this latest cosmic event, which sees the crinkle-chinned one as the universe’s last hope, is consequently a lot more interesting than certain other crossovers that have recently dominated the shelves. To encapsulate the event’s premise as concisely as possible, the Marvel Universe is being invaded by the inhabitants of the ridiculously named Cancerverse.  In this alternate reality, Lady Death has long been vanquished, which, as you might imagine, has resulted in a rather excessive population surge. In fact, the entire universe is so full of life that Cancerverse Captain Mar-vell and his legion of doppelgangers have decided to move in on regular MU territory and free everybody from the inconvenience of mortality.

This isn’t by any means the first time we’ve encountered alternate incarnations of the usual superheroes, but Dan Abnett and Andy Lanning have somehow managed to keep it fresh. They’ve so far maintained the perfect balance between the epic space battles we’ve come to expect from these events and some decent character moments. Not particularly deep character moments, mind, but if you were expecting existential angst or intergalactic introspection you’re probably reading the wrong book. Thanos Imperative is cheesy, high concept nonsense, but it’s also fun and unpredictable; something Marvel’s recent earthbound sagas unfortunately haven’t been.

The cosmic titles currently fill a self-contained corner of the Marvel Universe, and Abnett and Lanning are currently playing The Thanos Imperative like the finely crafted piece of fan service that it is. Not only has the event absorbed the Nova and Guardians of the Galaxy titles, but these first two issues have comprised a current who’s who of Marvel’s cosmic quasi-imprint. There’s also a one-panel cameo by the Silver Surfer, suggesting that he’ll play a greater role in Thanos’ return very soon.

Big comics need big art, and while Miguel Sepulveda’s art isn’t as crisp as the space opera stylings we’ve come to expect from Marvel’s cosmic titles, Jay David Ramos’s intense colours make Thanos Imperative read like a sci-fi blockbuster on an unlimited budget. A storyline where planets are exploding, laser beams are fired on every other page and half the cast are green/purple/blue/talking animals doesn’t exactly call for subtlety.

One final word of warning, though. This issue follows on precisely from the previous Thanos Imperative special, Ignition, ended, making it more of a second issue than a first. I’ve never quite understood the numbering logic behind these preludes, and in this case you’ll definitely need to read Ignition before starting the main 6-part series.