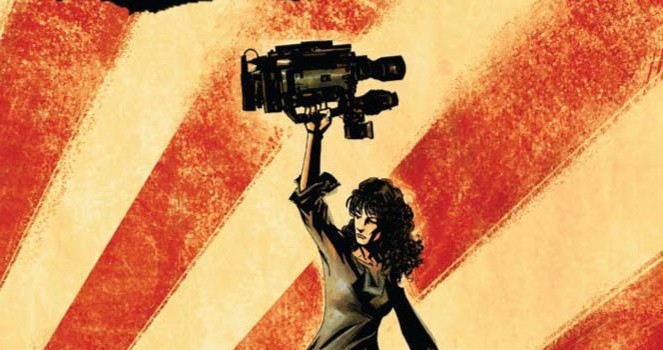 I was away when I received this info, so this is probably coming at the 11th hour. And yes, that headline was intended to aggravate.

Essentially, Tyler & Wendy Chin-Tanner of publishing company A Wave Blue World are looking for comic fans to help fund a print run of their comic project American Terrorist via kickstarter.com.

Kickstarter seems to be an increasingly popular way of gaining both interest and funding for indie projects, and in this particular instance donating a few dollars will get you anything from a digital copy of the book all the way up to original hand-drawn sketches by Tyler Chin-Tanner and Andy MacDonald (Punisher, Terminator, NYC Mech).

Check out the project here. (June 22, 2010- New York City, NY ) With five days in their kickstarter campaign left, Wendy and Tyler Chin-Tanner, creators of American Terrorist, pushed through a final digital issue of the title to help accomplish their goal to get the book to press. For a promise bid of $8, you get access to a behind the scenes blog as well as all four digital issues of the books now and four more later! Wave Blue World plans to release the next four issues digitally monthly if the campaign is a success! A kickstarter “promise” charge is only processed if the project meets its goal.

There are numerous other options on how to support the book, but only for the next 5 days. You can see more options at http://www.kickstarter.com/projects/tylerchintanner/american-terrorist-the-graphic-novel. Support promises have doubled in the last month, but more are needed!

“The success of our kickstarter project is a litmus test not a decisive action,” explained Tyler Chin-Tanner, CEO of A Wave Blue World.  “We are trying to decide where our company should go and we hope to have a better gage of the future of comics.  Is print still a viable option for new companies? The success or failure of the kickstarter campaign will simply influence our decision and not make it for us.”