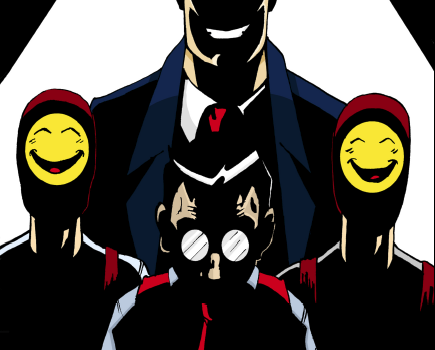 Oh how times have changed. Several decades ago all we had to worry about was Galactus devouring the planet or a late night encounter with an escaped Arkham inmate. Now, it would appear that comic book villains are getting just that little bit too recognisable for comfort. Take the titular Happy Aisles from Zach Hudson and Mike Murphy’s The Minions of the Happy Aisles. They’re a shady, unethical corporation that’s essentially Walmart, McDonalds, Asda, Tesco and every other all-powerful, all-consuming conglomerate you love to hate (but probably use regularly regardless) rolled into one. The Minions of the Happy Aisles

Book One of Minions begins in Peru, with a group of archaeologists and anthropologists studying a tribal region that will soon be flattened into a cattle ranch by United Beef. But when anthropologist Tasia Morgenstern and Dr. Ralph Westerburg discover a highly advanced relic that appears to contain some form of circuitry (Hudson does reference Erich Von Daniken’s Chariots of the Gods) the camp is ambushed by both Chinese Special Forces and American agents in smiley-face masks, and the relic stolen.

The second part of this volume takes place in Seattle, and concerns the abduction of ‘Igloo City’ teenie rocker Dana Peterson, again by men in smiley masks. Detective Jack Knudson, a kind-hearted cop with an eye for detail that would make Sherlock Holmes proud, is called onto the scene and, with Dana’s inept boyfriend Kevin in tow, traces the abductors back to a branch of the ubiquitous Happy Aisles.

Zack Hudson’s script in driven throughout by a very dry sense of humour. Even the narrator isn’t beyond impartially criticising the characters, who are often defined by their neuroses. The comic definitely works best during its sillier moments, particularly the end of the first act, when we are ricocheted about from Peru to China to Seattle in just a few pages, and Knudson’s banter with Kevin. The unlikely duo later team up with katana wielding bounty hunter Jacques, an action-orientated stereotype who feels like exactly the sort of comic character Hudson has so far been trying to avoid, though the final page suggests that he could take on the straight guy role – not unlike Casey from Chuck.

The art by Mike Murphy is a bit inconsistent at times, and given the self-published nature that’s entirely understandable, though a few fluctuating designs (sometimes Kevin has stubble, sometimes he doesn’t) occasionally threw me out of the story. I didn’t feel that his facial expressions fully exploited Hudson’s humorous script, either.

I definitely feel that the further Part One leant into utter quirkiness, the more enjoyable it was. This is the first book from Five String Press, and it’s an interesting and surprisingly original debut that perhaps suffers from trying to stuff too much into one issue. A few more hints as to just how the Peru and Seattle plotlines are intertwined would have given the first instalment that much needed hook. But nevertheless, there’s plenty to enjoy in The Minions of the Happy Aisles, and the combination of archaeology, sleuthing, Seattle rock, martial arts and a comically evil superstore worked really well.

For more on The Minions of the Happy Aisles, Book One, visit  www.fivestringpress.com (under construction at time of writing).