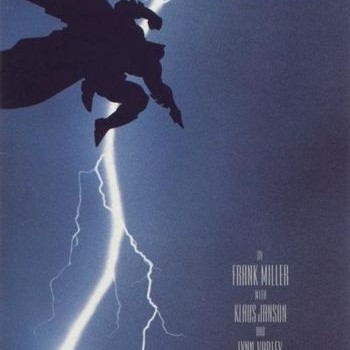 Is there really anything to say about Frank Miller’s 1986 vision of the Dark Knight that hasn’t been said already? So… Robin’s a girl, joker dies, and a geriatric Batman beats the crap out of Superman with a pair of enormous kryptonite mitts. Batman’s ticker may be close to quitting him, but his will is as strong as ever. Dogged and stubborn, despite an absence of superpowers he’s always been the Justice League’s Wolverine; the last hero to fall. Miller depicts Gotham as a Bladerunner-esque neon carnival of camp grotesques and apocalyptic savages.  His characters look a little wacky at times, but it suits the book overall – there’s life in his art. The frequent commercials, which came a year before Verhoeven’s Robocop (to which Miller would ironically pen the lackluster sequel) summon a media-driven climate not unlike our own, one in which digital celebrities can plausibly prosper and war is simply a ratings booster.

Like any classic of any medium, there are too many seminal moments to mention. In many ways this is as much the Joker’s book, as Batman begins to appreciate the ramifications for not killing his greatest adversary when he had the chance. And why DC has never integrated the concept of a female Robin into the mainstream universe beggars belief. Thirteen year-old Carrie Kelley is a far less cumbersome, naive sidekick than her eighties counterpart Jason Todd, (and at least explains the tights) witty and smart but still prone to the impetuousness of inexperience.

Perhaps what separates The Dark Knight Returns from the barrage of futuristic depictions that followed is that Miller knows when to stop. For all its legendary status, it’s a small, character-centric story, set in a future far closer to our present than the contemporary DC Universe.

Two decades on it’s still the definitive Batman story – the Joker’s swansong sees him at his most ebulliently depraved, a female Robin proves far less irritating than before, and Bats himself is at his most resilient and his most human.