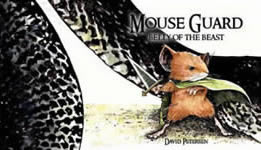 Children’s writer and illustrator David Peterson has received considerable praise for his mini-series Mouse Guard, and its microcosmically epic world of anthropomorphic mice. The world that Lieam, Kenzie and Saxon inhibit is a delicate, magical realm that, though not entirely original, feels fresh in the comic medium. In a children’s book, Mouse Guard’s illustrations would look nice; panelled into the comic format, they look divine. Despite the simplicity of Fall 1152’s imagery, Peterson’s careful composition and elegant depictions of the lush world these weenie warriors inhabit will enchant even the most cynical reader.

The story itself is also surprisingly grim, with the mice forever on the brink of extermination from the larger beasts. A somewhat rich history surrounding the Mouse Territories, with references to past conflicts and Mouse Guard traditions gives the universe a traditional, almost poetic intricacy.

The only criticism, unfortunately a major one, is that the book lacks any memorable characters. The Guards, identical in appearance but for palette variations, are a brave but humorous trio with little back-story or personal traits to differentiate them, and despite being such cute little critters they’re difficult to like. Peterson’s dialogue, though lending the book a sense of urgency, sometimes comes across a little passionless. A few lighter touches – a la Jeff Smith’s Bone, which Mouse Guard is reminiscent of in the best possible way – might have given the mice more appeal.

Though occasionally lacking in storytelling finesse, Mouse Guard is an enjoyable, pleasurably paced book that you will return to time and time again, marvelling at Peterson’s artwork with each rereading, and is perfect for children, adults and rodents of any age. With a sequel on the way (Winter 1152) there is definitely more mileage in the Mouse Guard and their tiny world.