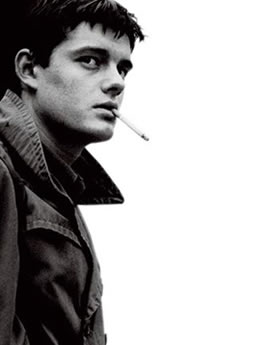 Dismantled on the eve of their first US tour by the tragic death of frontman Ian Curtis, Joy Division have found their place alongside Queen, The Doors, Nirvana and manner other as a creative force decimated by the demise of its key component. Cut off in its prime, on the brink of global success, Joy Division’s accumulated reverence and influence on countless contemporary bands is a far cry from their humble, almost cultish beginnings. It’s easy to see why their tunes persist. Their sound was unmistakable, inimitable and detached from any of the sounds of their time. Curtis’s lyrics were intelligent, highly literate and relentlessly bleak, his deep voice immense and hypnotic.

Like the Any Kaufman biopic Man on the Moon, Control is an exceptional film about an individual who arguably does not warrant such attention. Based on wife Deborah Woodruff Curtis’s book Touching From a Distance, the film depicts Curtis (Sam Riley) in an arrestingly candid light. He was clearly a confused individual, simultaneously introverted, hollow and overtly passionate, a lost soul romantic enough to propose to teen girlfriend Deborah Woodruff (Samantha Morton, looking a little too old for the part) but unable to relate to her or their child, or indeed cease his affair with Belgian journalist Annik Honoré (Alexandra Maria Lara). From watching Control it’s difficult to imagine him finding happiness doing something else, somewhere else.

Some of the scenes with Tony Wilson (Craig Parkinson) coincide with 2002’s 24 Hour Party People, which covered two decades of the Manchester music scene, and Wilson’s Factory label. Music video director and photographer Anton Corbjin paints an intimate, less colourful picture of the rock scene, in more ways than the monochromatically apparent, but Control lacks that films wild enthusiasm. A study of the enigmatic Curtis was never likely to provide substantial answers, but a documentary on the importance of his music might have provided a superior epitaph.

A small film, which treats Joy Division as both the crux and bane of Curtis’s life, Control is as bleak as the song from which it took its title. However, when the songs kick in, all played by the actors, its difficult not to appreciate his unique brand of misery, and the legacy it deservedly spawned.