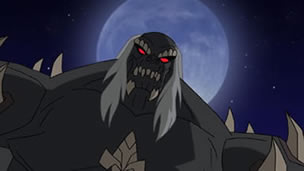 With few exceptions, adapting a treasured, often extensive, comic arc into a feature length film is a daunting, thankless task for any director; it is impossible to compress the “soap epic” element of the superhero comic medium into a 90 minute feature. Over the last few years we’ve had an earthbound Phoenix Saga, a turgid retelling of the entire Daredevil/Elektra romance, and had the Spiderman/Venom conflict introduced and concluded in less than two hours. Comic fans will be disappointed to discover that other than 1) the presence of Doomsday, and 2) the death and subsequent revival of Superman, Doomsday’s plot bears little in common with the original storyline. Whereas the original comic plot was deeply rooted in the DC Universe, here Metropolis seems somewhat empty, and devoid of other superhumans. Why are there no other heroes at Superman’s funeral? The Doomsday fight is exceptionally well executed though, if the overall film does suffer from having expended its ace so early on.

The four pretenders that arouse from Kal-El’s ashes may not have proven worthy substitutes, but they at least presented a worthwhile mystery. Their omission here renders the adaptation pointless, as does the “return” itself; Superman refuses to stay dead for more than ten minutes. The excision of the overblown Mongol plot is justifiable, but whoever thought an emo reinterpretation of Toyman would suffice in his place deserves to be dropped from Metropolis’s greatest height.

Despite its comparable aesthetic, fans of the Timm/Dini animated series from the early nineties may be a little disappointed to find that Doomsday has little in common with that forties-inspired series. Irritating punky, spunky Jimmy Olsen is devoid of the character’s trademark amiable naivety, a strangely crevassed Superman suffers from Adam Baldwin’s flat, unenthusiastic voice work, while James Marsters voice simply lacks the sheer panache previously brought to Lex Luthor by Clancy Brown. A three second Kevin Smith cameo feels somewhat pointless, given the overall lack of detail or allusions to the comic mythos that made Justice League Unlimited so much fun.

The level of violence on show is also somewhat disconcerting, and often completely unnecessary. A scene in which Lex Luthor blows away his head goon does little other than assure us he’s totally evil. Which we knew. There’s also something disturbing about such a vibrantly animated cartoon featuring the murder of a small child.

All in all, Superman: Doomsday is too violent to be recommended to the litluns, and too simplistic to appeal to the older comic nerd. Like Superman’s recent big screen return, it also suffers from complete misdirection, failing to offer either a unique vision of the Man of Steel or successfully imitate a favourite interpretation. Still, unlike Brian Singer’s tepid effort, at least there’s a measure of fun to be had here.