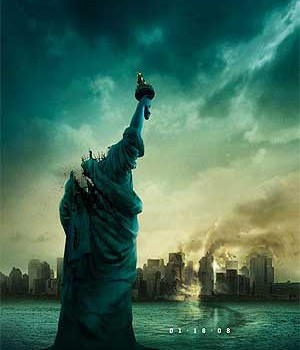 Man is a contradictory beast. As intellectual entities we romanticise our cities, elevate them as the culmination of civilisation’s greatest accomplishments. As the popcorn guzzling collective we love nothing more than to see said accomplishments crumble to the ground, preferably under the foot of a 500ft monster. Given the abundance of hype and incessant viral marketing internet surfers have been subjected to in the past year, Cloverfield was always destined to be a disappointment. But while it is neither the revitalisation of the Hollywood blockbuster the J.J. Abrams devout were anticipating, or the H.P. Lovecraft contemporisation which had literary cinephiles salivating at the very prospect, it delivers in what it sets out to do.

Presented as a US government classified artefact discovered in the aftermath of a devastating attack on New York by an unidentified monstrosity, the film’s novel approach could be easily dismissed by the cynically inclined as gimmicky were it not backed up by some solid filmmaking. Despite the shaky cam, it’s also a stylishly sophisticated work, impeccably paced and taut all the way until the abrupt, if understandably so, ending.

Let it also be said that Cloverfield is at times very funny. Screenwriter Drew Goddard retains the wry humour form his Buffy and Alias days; his script is laced with a dark, almost sadistic irony, but never veers too far from the faux improvised mocumentary presentation. Several moments in which the film cuts to older footage of our principal lovebirds on a seaside date, feels maladroitly manipulative, but does enables the audience to catch their collective breath.

The cast of (relative) unknowns was a good call; recognisable faces would have dislodged the film’s metafictional nature. This is where Cloverfield undoubtedly excels; bar what our camcorder wielding group discover, no further information about the monster is disclosed. Quite why T.J. Miller’s camera wielder “Hud” (off-screen but omnipresent) focuses on shooting his friends as opposed to the destruction around them is somewhat baffling; presumably the only reason one would embrace peril in the name of digital video is the reward intimate footage might merit. How the footage remained intact given the military’s proposed last resort is also never explained.

More Universal Studios experience than movie, Cloverfield does exactly what it sets out to do, which in this time of bloated, convoluted blockbusters makes it highly recommendable, if not entirely genre defining. Oh, and be sure to bring a brown paper bag.