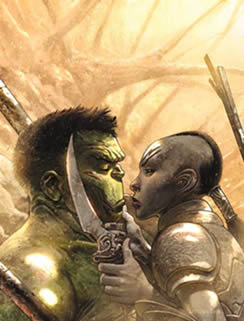 You just can’t keep a good franchise down, especially when that franchise is driven by a burly green brute with a fondness for purple and a sizeable partiality to smashing. But after forty-plus years of destruction – in which we’ve had had Grey Hulk, Smart Hulk, Bowl Cut Hulk and even the malevolent racketeer Joe Fixit – it’s becoming painfully apparent that there is little new that can be done with the green goliath. With more than a nod to the 70s television series, Bruce Jones briefly rejuvenated the fugitive Banner and his alter ego by returning them to their roots; sadly, this reboot could only last so long. Planet Hulk takes the opposite approach to Jones’ (relatively) grounded saga. Highly reminiscent of 2000AD’s early output, a miss-mash of sci-fi and Conan the Barbarian inspired fantasy elements. It’s tempting, if journalistically lazy, to label Planet Hulk as Gladiator meets Star Wars, but also pretty accurate. So I will.

Betrayed by erstwhile friends Reed Richards, Tony Stark and Dr Strange, the Hulk find’s himself banished onto an alien planet. Due to a navigation error the Hulk lands on the war-torn planet Sakarr, which is far from the tranquil tropical paradise Reed had anticipated. Sakarr’s maniacal emperor the Red King pits a largely enslaved population against each other in a Romanesque coliseum, and commands mass genocide like it were going out of fashion. Before you can say “I’m Spartacus” Hulk has fought for his freedom, and is leading a rebellion against our red-skinned Commodus.

Despite the fresh change of setting, Planet Hulk gets tiresome surprisingly fast, predominantly due to the “Green Scar’s” sole solution to any confrontation; he clobbers his opponents, regardless of size, ethnicity, age or gender. And there are plenty of them to clobber, including X-Men adversaries the Brood, and the Spikes; a sentient virus that doesn’t so much borrow its concept from the Halo series’ chief antagonist the Flood but unabashedly rip the idea completely. This monotonous feuding robs Planet Hulk of any scale; the action graces a dozen different landscapes, and Hulk’s new nemesis, the archetypal insane emperor, is never more than a panel away. Even a welcome cameo from the Silver Surfer provides but another excuse for a punch-up.

An extensive glossary at the rear of the book indicates just how much effort Greg Pak put into Planet Hulk, though given the inevitably cataclysmic finale it’s difficult not to see his hard work as wasted labour. He’s an excellent writer, but his work does suffer from trying to stuff a five-volume epic into just one. The range of highly proficient artists bring a colourful vibrancy to Sakarr, with the planets fauna, flora, civilisations and technology all rendered with breathtaking detail and variety. Sakarr’s various races are varied and interesting, and Hulk’s gathering of slaves is an amiable, bunch, each with individual reasons to fight.

It may be a little bloated, but Planet Hulk is a worthwhile read, with a heartrending conclusion that will mark the adventure as one of the jade thug’s most memorable, if not finest. Ultimately though, it serves as only the prelude to the monotonous, inferior World War Hulk, in which Hulk beats the crap out of everyone on earth, period. After reading Planet Hulk, I’m somewhat apprehensive in deciding whose side I’m on.