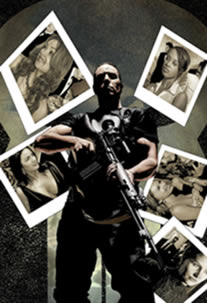 It has been prophesied that in the year 2022 Garth Ennis’ mojo will run dry, and we’ll finally be forced to suffer his substandard output. Of course, Ennis’ worst work will still be better than anything else of its time, so that’s not really an issue. Still he churns out Punisher plot after Punisher plot. And still, they’re pretty damn good. A little over-familiar, mind, but Ennis keeps each new story arc undeniably readable. Widowmaker has a rather novel premise: the widows of the various Mafioso scumbags Frank Castle has eliminated decide to join forces and assassinate him.  Lacking their husband’s numbers or force, they plan to use another criminal gang to lure the Punisher into their crosshairs.

Ennis’ grotesque caricatures are starting to become a little blurred, if only for the fact that he’s covered every fetish, depravity, addiction and physical deformity on our good planet. The cock-fiend Desperate Housewives parody Barbi, for example, is an amusing character but lacks that Garth Ennis humanity that made Preacher’s nastiest sickos bizarrely likeable.

Detective Paul Budiansky, a family-man who recently murdered armed criminals in a way not entirely dissimilar to the Punisher’s methods, is an interesting character. Its Budiansky’s subplot that really holds the book together, and Ennis brings the various plot strands together for a satisfying, and surprisingly deep, conclusion.

I’ve always upheld the belief that a Garth Ennis story is never complete without Steve Dillon’s pencils, but Lan Medina’s come a close second. His facial expressions are spot on, and capture Ennis’ dark humour better than some of the series’ more recent artists.

Sure, the average Punisher fan has essentially read Widowmaker before, in some form or another. But unlike, say, Daredevil or Spider-man, there’s no need to inject change into Frank Castle’s descent into hell. His righteous, bloodstained crusade never tires.