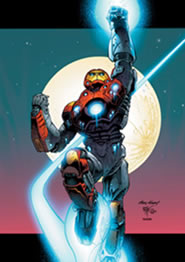 Whenever I pick up a silver age comic, the first thing that strikes me is the intoxicating scent of yellowed paper. Can’t stop sniffing the stuff. The second thing that strikes me, however, is how languid comic pacing has become. Were The Inevitable printed some time in the seventies, it would have been an issue long, two maximum. Today, it takes up six parts. The book sees three of Iron Man’s old nemeses return and indirectly combine forces; the latest incarnation of Spymaster, the Living Laser and the Ghost. All B-listers sure, but the variety of villain that is always fun to watch. Sort of the underdog antithesis of Spider-man, these guys are destined to fail, but we enjoy seeing them punch above their weight and break several bones in the process

Like much of Joe Casey’s work, The Inevitable is efficient but unspectacular. Marvel’s writers seem to have a tough time gleaming something new from the impersonal icon that is Iron Man, and resort to pushing the character into exhausted revenge territory to show us Stark’s human element. Thankfully Casey keeps the pacing brisk, with a series of email exchanges handling much of the exposition, a plot-device that suits Stark’s schedule well, if he does occasionally reply on Jarvis to exposition the book’s overriding sentiment. Unfortunately, Spymaster’s identity is glaringly obvious from the moment an obnoxious business rival confronts Tony Stark at a charity ball, as is the fate of Stark’s new love interest.

Frazier Irving’s art is a mixed bag, intermittently inspired and clumsy. Though I personally liked his work on Klarion the Witch-Boy, I feel a book such as this requires a more conventional touch. Still, his fevered colour pallet more than make up for his horrendous characters.

The Inevitable does nothing wrong other than push Iron Man into already heavily charted territory. While its fun to see some of Shell-Head’s old rogues back in the game, someone really needs to give Stark a more effective villain than his own ego.