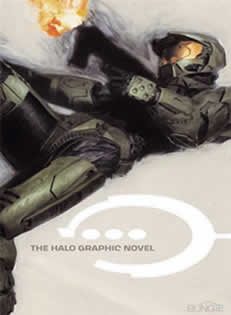 Given that Halo recently earned itself a page in media history as the first console franchise to send Hollywood to its gout-swollen knees, the Master Chief’s transition from video game to comic book was inevitable. Sadly, like the trilogy of games it’s derived from, this quartet of in-between tales successfully conveys the series’ high presentation values and sense of scope only to jettison its plot at first sign of an Imperial Cruiser. Apologies to those spasmodically recoiling with embarrassment at that last line, but it is difficult to read the Halo Graphic Novel without thinking of Star Wars. As absorbing as the video games were – and they were truly grand games – the series has always lacked the eclectic vibrancy that a certain galaxy far, far away embedded into our cerebrums at an early age. Halo 2’s depiction of Earth was barren and uncharismatic, and the series’ infamously stark, repetitive interiors have always felt like “levels” rather than the rich, lived-in environments of that other trilogy. It’s impossible to imagine anyone who isn’t a marine, a fanatical Covenant or a seven foot tall killing machine actually existing in the Halo Universe.

Anyway, all of the stories here deal with to the minor characters and incidents fundamental to the events of the first two games. We find out how Rtas ‘Vadumee (the Arbiter’s Elite buddy with the missing mandible) earned his trophy scars, how Sergeant Johnson escaped the flood in the Halo 1 chapter ‘Breaking Quarantine’, as well as witnessing the Mark V Mjolnir Assault Armour in training, and getting a taste of what life was like in New Mombasa before the Covenant invaded.

With commentary from the creative talent on both sides, the Halo Graphic Novel presents itself as the next step in video game fandom, the beginning of the Halo Universe’s limitless scope, presented by an industry within which printed and electronic entertainment harmoniously exchange ideas. In reality, it’s little more than a waste of great talent, a superfluous cash-in that would have George Lucas ruffling his beard in approval. Whereas Dark Horse’s Aliens and Predator books from the early nineties gave us characters and scenarios that were captivating if not worthy of movies themselves, Halo fans will gleam nothing new from this book.

As a coffee table adornment, the Halo GN is a work of art. As a showcase for the Halo Universe’s storytelling potential, it gets fragged before letting off a single shot. A large selection of splendid artwork at the rear perhaps unveils the book’s illustrator driven impetus. Definitely one for Halo’s hardcore community. Which, admittedly, consists of millions.