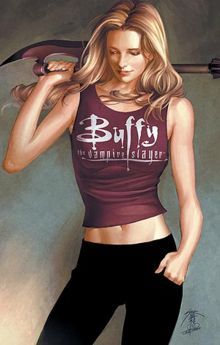 “Oh Buffy, how we’ve missed you. Maybe we didn’t appreciate you back in your heyday. Shucks, we were stupid, ignorant and ungrateful. But we’ve seen the error of our ways, Buff. This time you’ll get the respect you deserve.”

The Buffyverse broke many hearts when it disappeared from our screens, leaving only one more season of Angel, which culminated in the greatest yet most infuriating unresolved cliff-hanger since Twin Peaks. Though Angel has continued in comic form, IDW’s frequent output has mostly disappointed, largely due to the continuity restrictions placed upon the writers; the stories had to fit snugly within the show’s established time period. Cue an onslaught of Spike-centric flashback plots, and plots that wedge neatly between existing episode continuity. Having clearly accepted that his little universe won’t be making a comeback (for now) series creator Joss Whedon is headlining Buffy’s canonical return in The Long Walk Home, the first volume in what will eventually comprise season 8. Unfortunately, in the few years she’s been off air, Buffy has lost that certain something.

The gang’s all here, and then some. With Sunnydale currently a crater, the Scoobies and co. have relocated to a citadel in Scotland, where they suffer and old enemy’s wrath and uncover a new Big Bad, known only as Twilight. My main concern with Seasons 8’s kick-off is not the lack of familiar faces but the excess of them. Whedon is a little too eager to pull his fans back into the Buffyverse, weighing the prospect of new evil presence with a bevy of cameos from the series, all of which deserved their own stories. The surprise return of a villain with a unique skin complaint, in that he has none, feels like the kind of cheap cash-in one always fears when reading these books.

As with Whedon’s previous Slayer book, Fray, The Long Way Home is sorely lacking in the quieter, soap opera moments that made the series so much fun and its core characters so amiable. The few moments between Buffy and her sibling Dawn – enlarged to gigantic proportions after sleeping with a thricewise, whatever that is – remind us why we fell in love which these guys the first time round. Whedon clearly loves his creations too, but without the budgetary restrictions of television, he’s excised the “filler” moments, the trivialities of daily life that were, to many, what made the show such a joy. There are only so many zombies a Slayer can effortlessly decapitate before she loses her vulnerability and, consequentially, our interest.

Georges Jeanty presents, for the most part, an accurate rendering of the familiar faces, and cuts nice balance between realistic and “cartoonish”. The decision to cram such large story into 4 issues does tend to leave the pages looking a little cluttered at times, which is essentially the book’s problem; it tries too hard. The events of The Long Way Home could have filled an entire season of the show. Only the one-issue short The Chain offers any level of pathos, ironically due to its omission of the main cast. Whether the plotline inaugurated here will impact later stories remains to be seen, but I’m doubtful.

It’s difficult not to feel short changed with the Vampire Slayer’s third resurrection, but I hope the groundwork has been laid out for something truly special. As far as franchise revivals go, the first instalment of Buffy Season 8 is no Phantom Menace, but neither does it rank alongside Serenity.