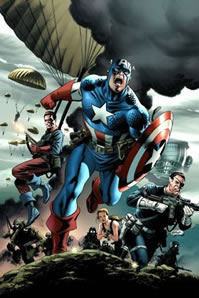 Writing this review some two years after Ed Brubaker’s Captain America reboot debuted, it’s safe to say that the Winter Soldier’s identity is now common knowledge amongst the comic community. The defrosting of Buchanan “Bucky” Barnes, now a Soviet assassin with a bionic arm, ranks alongside the Captain’s finest moments, and overcomes any prior doubts naysayers might have had about this most sacred of resurrections. Ed Brubaker’s work needs no further praise, and here he juggles multiple plots with intellectual ease. Marvel clearly gave him a hell of a lot of creative freedom here, and the result is a reboot that consistently surprises, be it the ostensible death of the Red Skull or the revelation of Bucky’s role as a diminutive, auspicious assassin who could fulfil the assignments that Cap was morally incapable of. Equally intriguing is Steve Roger’s seemingly psychic attachment to his new Russian nemesis.

The dialogue is occasionally contradictory to the book’s tone, with Brubaker’s old-school tone jarring with the darker design. But conversely this is what makes Captain America so intriguing; he’s a relic with values that have no place in Nick Fury’s clandestine schemes.

Though the incessant flashbacking does detract from the book’s pace, Winter Soldier works primarily as a reminiscence of the many incarnations of Cap; as an introduction to the character and his supporting cast it’s unparalleled. Steve Epting’s art is suitably gritty, similar to his excellent work on the now forgotten El Cazador, and alongside Frank D’Armata’s subtle colours give the book a gritty, cinematic sheen.

Perhaps the biggest surprise here is the tangent story, ‘The Lonesome Death of Jack Monroe’ which chronicles the last year in Cap’s former sidekick and successor to the Nomad mantle as he succumbs to Alzheimer’s brought on by the super serum. It’s a tragic little tale told out of time, that’ll make you care for Jack more than you’ve ever had reason to in the past. Wicked twist at the end, too.

As excellent as Brubaker’s initiation is, it really is just that; we’ll have to wait for volume 2 to see whether the pay off is worth it. If the work so far is anything to go by, it will be.