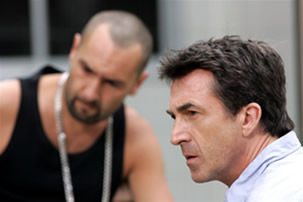 The discovery of two corpses reopens an investigation into the murder of paediatrician Alex Beck’s (Cluzet) wife Margot (Croze) 8 years ago. Cleared but still suspected of Margot’s killing, Beck is once again prime suspect. But a series of mysterious emails imply that his wife may still be alive.

Another year, another taut, superlative French thriller. Canet’s adaptation of American author Harlan Coben relocates Beck’s search for his dead missus from New Jersey to Paris in this dynamic mystery. Despite the generic premise, the film has an abundance of inventive touches. A henchwoman who inflicts suffering on her victims using pressure points, torturing them but leaving no mark, is especially refreshing in this age of Hostel and Saw. Beck’s best friend (Kristen Scott Thomas) is also his sister’s lover, but Canet pushes her sexuality aside; she is a character who just happens to be gay. A galvanising chase scene across a busy highway will surely “earn” Tell No One the obligatory Hollywood makeover. Shame, really, as this is about as accessible to subtitle wary audiences as French cinema gets.

Tell No One is engrossing from start to finish, but its big reveal – unfolded via a lengthy monologue that Agatha Christie would be ashamed of – is predictable and the happy ending wraps things up a little too nicely. Canet keeps his cards too close to his chest; like the “he’s the killer” twist in White Noise, the revelation that our protagonist’s father was murdered has little impact because the his death has not been mentioned previosuly. And a series of schmaltzy flashbacks of Alex and Margot’s childhood feels as though it was compiled from stock commercial footage.

But these minor niggles do not detract from this superior thriller. Both intelligent and perplexing, Tell No One only failing is that it is too efficient. Unlike last year’s ambiguous Hidden/Caché, there is little to nourish the brain once it’s all over.