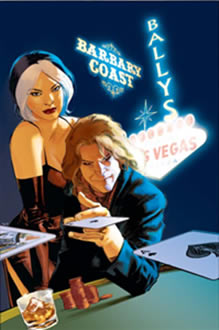 This volume collects the four 2006 annuals from Marvel’s slowly declining Ultimate imprint. It’s an odd medley in all, with three of the segments impacting their monthly title’s continuity enough to feel out of place here, and strangely absent in the corresponding monthlies. The Fantastic Four meet the Inhumans for the first time, and lose them again, Johnny falling for Crystal in the process. It’s as dull and uninspired an introduction to one of the mainstream universes most underappreciated teams, remarkable for Jae Lee’s art alone.

In ‘Ultimate Sacrifice’ the X-Men tackle Spider-man’s rogues gallery in the danger room, while Rogue and Gambit run into (and are consequently run over by) the Juggernaut. Reading and looking like something from the mid-nineties, there’s little new here, though Rogue’s powers do take an ‘interesting’ turn.

The obligatory Spidey section sees Peter Parker date Kitty Pride for the first time. It’s a nice enough little tale, which feels aimed at female anime fans than anyone else, but Bendis’s dialogue is, as ever, jazzy enough to make even the most generic plot sparkle For what it is it’s a pleasant, if dispensable yarn.

‘The Reserves’ is by far the book’s best selection, complementing the monthly title rather than presenting any potential consequences. One of those tales that focuses on the bit players – the military officers comprising the Goliaths and Rocketmen – and narrated by Nick Fury, an amoral character far removed from his Caucasian cousin, it’s a dark and pleasingly depressing piece, with a satisfying twist at the end. Millar does this sort of thing exceptionally (its hard to believe he also wrote the Fantastic Four segment) and Steve Dillon’s art is always a treat.

‘The Reserves’ aside, it’s hard to recommend this collection to all but the Ultimate enthusiast, who will have undoubtedly bought it already.