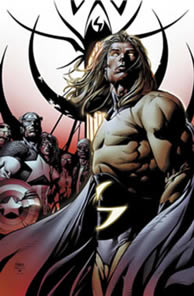 Fans anticipating Marvel’s New Avengers were left strangely confused after the initial story arc failed to include two members pictured in the promotional material; the Sentry (Marvel’s Superman) and Ronin (at this point, identity undisclosed). Volume 2 integrates the former – the latter has yet to appear – but flounders with this dilemma; how do you integrate a superhero who thinks he’s a comic book character into the Marvel Universe? The team are still a little bland, and their union increasingly forced. A brawl with Wrecking Crew member… er, Wrecker is a little lowly for this union of super powers. Still, any excuse for Steve McNiven to parade his staggering artwork is a valid one, and Bendis’ trademark Spidey wit is ever-present.

Though I loved Jenkins’ original Sentry min-series I wasn’t comfortable with the idea of Sentry acknowledging his existence as a comic character. Morrison did something very similar with Animal Man in the nineties, and while it was superb in the pages of that book – which though part of the DC Universe, never felt like it under Morrison’s pen – I felt Buddy’s awareness of his “creator” greatly demeaned 52. Once the Fourth Wall is broken, there’s no turning back.

Sentry’s main problem is that not a lot happens, I mean actually happens. The end effect of the book is similar to the dud finale of a horror movie in which the heroine moistly leaps from bed, realising the preceding events had been a dream, and the viewer realises they’ve been short-changed.

Integrating the Sentry into the Avengers was clearly something that would not be easy, and Bendis did the best he could given the situation. Still, one can’t help but feel that he would have been better off mimicking Ennis’s Punisher revival – scrap the past and start anew – it would have certainly saved us all several pounds. Instead, we are left with a four issue arc that ultimately brings the Sentry character to where he was in Jenkins’ original 2000 series.

As with volume one, Sentry is glossy stuff, and Bendis’s presence ensures a riveting if ultimately shallow read, but you could skip to volume three and miss nothing.