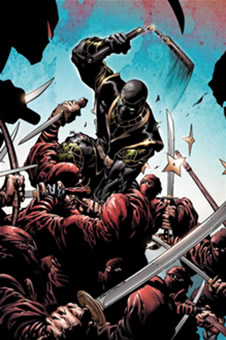 The New Avengers continues its rather slow set up; 17 issues later we have the official roster being publicly announced. Whereas volume two dealt with the Sentry’s inclusion into the team, Secrets & Lies focuses on Spider-Woman, returning to a scintillating plot begun in the series’ first issues; the HYDRA spy in our team’s midst. Refreshingly, Jessica Drew’s back-story is an elaborate one, and one that has not been retold a thousand times over. Still the title suffers from small-time antagonists – regardless of the recent supervillian outbreak responsible for the team’s reassembly – in this case Silver Samurai and a crew of Electra’s Hand ninjas. That our New Avengers can wisecrack as they slap their way through Japan’s elite assassins really empathises the omission of a greater threat that the series is suffering from. The presence of HYDRA, a menace long-defanged, is far too ominous for its own good; it’s hard to be exited when we know so little of their plans. “Up to no good” is not a sufficient hook.

New character Ronin finally makes his/her appearance, only to disappear soon after and be absent during the team’s announcement. His/her identity is one that will please fans of Bendis’s Daredevil run, but I can’t help but feel that ninjitsu skills and a pair of nunchuks pale in comparison to the Sentry’s truly superhuman abilities.

David Finch and Frank Cho take over from Steve McNiven’s superior art, though both do a good job. An eight page section from Giant-Size Spider-Woman #1 is a pointless inclusion, considering that the same events are recounted a few pages on, and Mays’ pencils are frankly horrible.

New Avengers started with a bang – technically, it was an electrical surge – but doesn’t seem to be going anywhere. Bendis’s direction keeps it entertaining, but already the team needs to be shaken up a little. By some kind of Civil War, one with devastating consequences for the entire Marvel universe, perhaps…