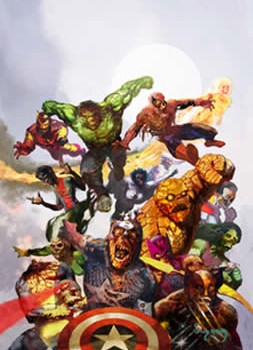 The two big ones do thrive on gimmicks. If it’s not the next Death of A Nobody, it’s the obligatory annual Big Event, the repercussions of which are never anything but minimal. Dragging its rotting corpse onto the back of the recent undead bandwagon, Marvel Zombies is a book held together entirely by its concept, but boy what a concept! For the first time since Infinity Gauntlet, the House of Ideas has found an exciting and original way to destroy its own universe. The action immediately follows the events in the Ultimate Fantastic Four arc ‘Think Tank,’ in which Reed Richards establishes communication with his counterpart from a zombie-infested parallel universe. Only when the Four reach this alternate Earth do they realise they’ve been duped; Reed’s double is a little more decomposed than they’d imagined, and is more interested in nibbling on Sue’s ears than receiving assistance. See kids; it’s never a good idea to communicate digitally with long-distance strangers. Anyway, Marvel Zombies follows the zombiverse’s Magneto, one of few remaining uninfected superhumans, after his ingenious machine had allowed the FF to return home, trapping the zombies it their own dimension.

Kirkman’s Walking Dead series was lauded for its believable characters and solid pacing, factors which Marvel Zombies sadly lacks. There’s a valid reason why few monster movies are told from the perspective of the monster… The zombie’s fluent dialogue never quite gels, and the omission of a central protagonist kills any level of suspense. Tackling the material lightly was a good call, but there’s a thin line between the dark slapstick of Evil Dead II and inexcusable insincerity.

Published in its original format, one of Marvel Zombies’ strongest selling points was Arthur Suydam’s series of stunning painted covers and variants, each a zombified depiction of a classic cover. Even Marvel newcomers will recognise the majority of them. Unfortunately, Sean Phillip’s interior artwork is far from pretty, and lacks an attention to detail that would have made such a book a must-buy.

I feel like I’ve been a bit hard on this book. All in all, it’s an enjoyable read, if more for the idea than its execution. But as with most of Marvel’s large-scale storylines the end result falls flat. Marvel Zombies is worth a read, but if you yet to read Kirkman’s The Walking Dead or Invincible, do so first; both are far superior works.