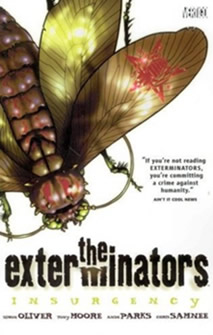 Essentially, Simon Oliver’s Exterminators is Repo Man set in a pest control institution. This is not to say that Exterminators is in any way derivative of Alex Cox’s cult classic, but that it presents a seemingly prosaic occupation, which our trio of intrepid super-swatters fulfil with a jaded weariness. The bugs are clearly not your normal bugs – they’re highly intelligent, for one – but the world they inhabit is somewhat grounded, with the surreal, science fiction elements kept in the background. Oliver does well with a seemingly insipid premise, set within a world in which anything can happen but rarely does. Insurgency’s plot is neither original nor particularly gripping, but Oliver’s dialogue is the book’s strength, with his ex-con menials musing on everything from to Nazism to Dharma. Darkly humorous locales, such as the literary brothel where clients pay to re-enact scenes from William S. Boroughs and Lewis Carroll are also great fun. The series began life as a television pitch, and this definitely shows in the slower, character-centric pacing.

Tony Moore’s art style is suitably odd, with several characters looking like refuges from a different book, but it works well here. Chris Samnee’s interlude is fine, if less suited to the book’s burlesque tone. The interlude itself, however, is probably the books weak spot, ostensibly having no impact on the overall story or its central love triangle. Though the mystery of the Egyptian box discovered by Henry James in volume 1 is a scintillating story arc, there’s too little to suggest what it might contain to get the reader excited just yet.

Exterminators is one of Vertigo’s more frivolous titles, offering no political allegories or social commentaries. At present it’s just a bit of fun, but when Oliver’s subplots begin to converge it could well be Vertigo’s sleeper hit.