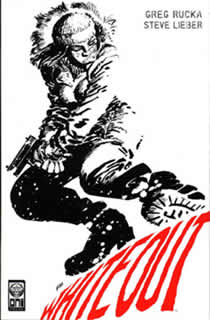 Whiteout: a weather condition in which visibility and contrast are severely reduced by snow and diffuse lighting from overcast clouds.

U.S. Marshall Carrie Stetko feels the same way about her current predicament; emotionally vacuous and struggling to lose her past, she is only given impetus when an unidentifiable body is found on the outskirts of McMurdo Station, Antarctica. Often a comic book’s setting is an afterthought ruled by convenience, but Antarctica’s cold dominates Whiteout and its characters. The books icy, isolated setting is key to its success; think Carpenter’s The Thing minus the monster, with shades of Fargo. Paranoia runs throughout McMurdo Station, its inhabitants in a state of existence rather than living. Stetko’s friendship with begrudged coroner McEwan appears to be the only area in which she displays warmth; even the rising homosexual bond between her and British agent lily Sharpe is frigid.

Greg Rucka’s narrative is secondary to his characters. Stetko is the kind of substantial, believable female that is rare in film and practically non-existent in comics, sympathetic despite her aggressive front. Steve Lieber’s art compliments the stark outpost with an impeccable level of detail, and it’s clear from his afterword that he saw Whiteout as opportunity to produce something truly great.

Unfortunately, despite its dense narrative and thoughtful pacing, Whiteout’s story is ultimately a little shallow, lacking the sense of mystery fundamental to an intriguing whodunit. With so few suspects, neither the killer’s disclosure nor his reasons are particularly surprising.

Whiteout is soon to be a motion picture from Swordfish director Dominic Sena, with Kate Beckinsdale in the Stetko role. Beckinsdale is a curious choice, far too attractive to fill the Marshal’s sexless, impersonal shoes. Still, Sena will have to apply few changes to turn Whiteout into a solid movie; the exceptional dialogue, cinematic scope and unique atmosphere are already present in every panel.