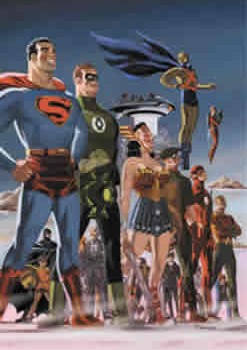 It would be easy to dismiss Darwyn Cooke’s The New Frontier as another retro inspired reinterpretation of the currently stagnated superhero genre. Essentially, that is all it is. Comparisons to James Robinson’s The Golden Age are also inevitable, but Cooke avoids that book’s descent into darker themes, fastening a multitude of plot strands into something that is anything but unforgettable. Though Cooke’s journey through the Cold War era focuses on Green Lantern, The Flash and Martian Manhunter (a riot in his Mike Hammer inspired, hard hitting but idealistically moralistic detective persona, John Jones) a mammoth roster of lesser-knowns all have their moments, including King Faraday, Adam Stange and Ted Grant (Wildcat, seen here KO’ing a young Cassius Clay). A somewhat gloomy prologue featuring the forever doomed Losers announces the books approaching menace, while the John Henry revenge tale embodies all that was wrong behind 50s America’s pure white picket fences.

Ultimately, The new Frontier stands besides such classics as The Dark Knight Returns and Kingdom Come; a full, compete encapsulation of the superhero genre and everything it stands for (or should). For all its social and political commentary, Cooke’s opus is a work moulded from a love for its subject matter, one which will appeal to all ages on multiple levels, and induce a feeling of nostalgia in even the most uneducated comic reader.

When an ambitious, heartfelt project like The New Frontier fails, it’s still worth the price of admission. When everything comes together, as it does here, it soars into the lofty territory of the classic.