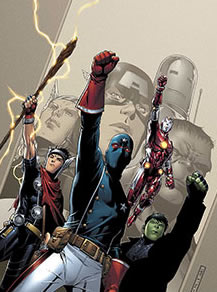 In the genre specific confines of the comic medium it is so rare to be surprised by a superhero book, let alone one published by Marvel. Sidekicks is everything it shouldn’t be, fresh, energetic and intelligent. I cannot say that Heinberg’s Young Avengers surpassed any expectation I had for it, because I had none whatsoever. Sidekicks directly follows the events of Avengers Disassembled, in which a traumatised Scarlet Witch lost control of her powers, killing Hawkeye, Ant-Man and, seemingly, Vision in the process. With the demoralised team disbanded, a damaged Vision initiates a contingency plan to recruit new members in the event of an eventual crisis. When the team are dubbed by the press as ‘Young Avengers,’ Captain America and Iron Man are understandably unimpressed that their likenesses are being exploited by four inexperienced teens: Patriot, Asgardian, Iron Lad and Hulking.

The new hopefuls are of course unashamed facelifts of Thor, Captain America, Iron Man and Hulk. But Heinberg (Grey’s Anatomy, The O.C.) gives them enough flavour to be distinct and worthwhile characters in their own right. The Patriot, clad in a costume resembling Bucky’s, is the grandson of Isaiah Bradley, the original Captain America, and resents Steve Rogers for the ‘successful white’ version he is.

The dialogue is snappy and natural without faltering from its purpose, and the team’s first bungled rescue attempt has a hearty, Mystery Men appeal to it. Jim Cheung’s precise lines are brought to life by Justin Ponsor’s incredible colours; this is indeed a pretty book.

What makes Sidekicks so effective is that it acts as a celebration of the original Avengers line-up, and what they once stood for. Kang the Conqueror has always been a great villain, and his presence adds a sense of gravitas that few other Marvel antagonists can match.

As with Runaways, Young Avengers is a character driven super-soap that manages to be as impulsive and unpredictable as its leads. Ironically, it’s a far more interesting and, dare I say it, mature, series than the recently deceased title it arose from.