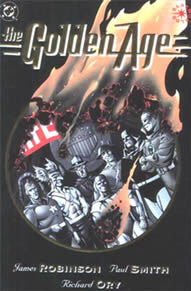 The DC universe has become a daunting, temporally retarded place of late, never moving forward, always looking back. While this is not essentially a bad thing – the costumed vigilante has changed very little from his 1930s origins – modern DC continuity has become a strain on the noggin. Though the desire for a purer hero, free from the nihilistic worldview of the Dark Age antihero, did not start with The Golden Age, Robinson and Smith’s unobserved classic was a big factor in DC’s revival of the popular Justice Society of America title. The multi-layered plot, a skilfully crafted allegory for the post-World War II paranoia that strangled 50’s America, is impressive not only for its dense plot but its humanity. Every character is perfectly realised. Hourman fights an addiction to the Miraclo drug that gives him powers, while Starman wrestles with his conscience after discovering that his staff’s technology aided development of the atom bomb. Alan Scott, his Green Lantern persona blacklisted during the McCarthy witch-hunts, still fights vigorously for the rights of his employees.  These guys remain heroes without the cape and tights. If the storyline has one problem, it’s that the villains are a little too diabolical, with the fourth act’s big reveal conflicting with the book’s more mature themes.

The Elseworlds label is somewhat misleading, as though The Golden Age was not originally intended as canon, much of the material was incorporated into regular DC continuity, with many of the books theme’s running into Robinson’s seminal Starman. In a multiverse that is retconned every other decade, these minor discrepancies are trivial.

In many ways, James Robinson and Paul Martin Smith are the men responsible for DC’s current rose-tinted perspective. But bear them no ill will, I say, for The Golden Age is a splendid read that epitomises the finest days of those Mystery Men, a world before Superman, Batman and Wonder Woman that is all the more interesting because of it.