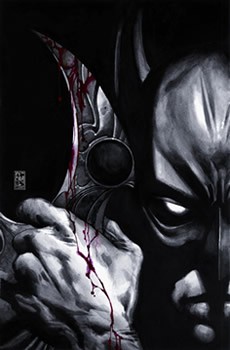 Reading Face the Face I was reminded of the old comic adage, “nobody stays dead in comics except Bucky and Uncle Ben.” Similarly, when a Bat-villain is captured and sentenced to ten years in Arkham, they’ll be out and causing havoc again in two months time. Face the Face emphasises a similar tied and tested rule: when a popular villain reforms, he’ll eventually turn bad again. The more things change in comics, the more they stay the same. After following Batman for almost two decades, I feel like I’m stranded in some cyclical hell where I shall forever read the same goddamn comic again and again.

Taking place after Batman’s post-Infinite Crisis year of absence, Face the Face sees Harvey Dent’s impact on Gotham’s criminal underground. Having undergone reconstructive surgery, Dent has overcome his split personality disorder and is now zealously cleaning the city’s streets of his former buddies. Naturally, Dent begins to crack; it’s only time before the malevolent Big Bad Harv, as he was coined in the Dini/Timm animated series, resurfaces.

Kirk and Kramer’s art styles compliment each other well, mainly due to John Kalisz’s attentive colours. But again; this is nothing that has not done been better elsewhere.

It would be easy to blame the tepid story on Robinson, and admittedly his work here is lacking his usual finesse, but the truth is inescapable; more than any other superhero, Batman has been done to death. DC seems reluctant to expand Batman’s rogues gallery. True, it is the best assortment of villains and psychopaths in comicdom, but I get the feeling from recent Bat-books that the character is just going through the motions. Superman and Green Lantern can travel to other planets. The Flash can/could hop between dimensions. To no fault of the creative talent involved, Batman’s territory seems a little cramped and a lot familiar.