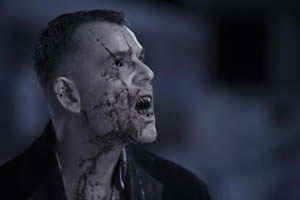 Take one small Alaskan town inhabited by wholesome and earnest yokels, place it within the Arctic Circle, a spot which annually undergoes a month without sunlight, add a mob of esurient bloodsuckers and stir thoroughly.

30 Days of Night is that most potentially profitable of franchises; one which sells its premise through its title. Adapted by Steven Niles and Stuart Beattie from Niles’ sequel-spawning graphic novel, it’s a faithful if flavourless adaptation that does the best expected from its overvalued source material. 30 Day’s antagonists are not the elegant, gothic chic vamps of lore, but animalistic savages, communicating in primitive, screeching howls. It’s not jus the locales that are cold and lifeless. Ben Foster’s animal mutilating stranger, indistinguishable from his recent role in 3:10 to Yuma, adds a sense of foreboding to the films last moments of light, but is given little depth or motive beyond that of a familiar from Blade. A barely recognisable Danny Huston, ever the underrated and underused talent, has little to do as the vampire pack leader but snarl and speak archaic gibberish, while the bland Joss Hartnett and vacant Melissa George lead a forgettable cast of prospective nibbles.

Ultimately, 30 Days of Night’s main fault is that it fails to fright, predominantly due to a complete absence of ambience. The relentless and visceral carnage of the vampire’s feeding frenzies is devoid of atmosphere. Despite borrowing elements from John Carpenter’s entire back catalogue, director David Slade (2005’s proficiently taut Hard Candy) blunders the fundamental rule of horror that the budget-restricted Carpenter had to rely on; fully revealing his slanty-eyed bloodsuckers from the get go. Brian Reitzall’s ballistic score drowns out any potential tension, draining the quieter moments of character or suspense. The small town Barrow’s apparent film set – curiously illuminated for a sun deprived locale and smothered in the greatest cinematic blasphemy of them all, CGI weather effects – makes the long shots look like a live action stage show at Universal Studios. Given a more experience helmsman 30 Days might had had promise, but it’s hard to maintain one’s suspension of disbelief when Slade fumbles so frequently.

Distinguishable only for its novel premise, 30 Days of Night offers little new, and comes across as slightly incompetent. Still, it is a notch above any of Hollywood’s recent vampire flicks.