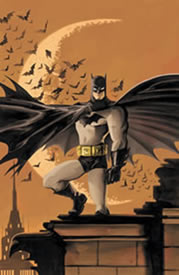 Matt Wagner presents the Dark Knight’s first foray into the bizarre, in this Frankenstein flavoured pseudo-sequel to Miller’s Year One. The Batmobile, Robin and crew are all absent, and Batman’s relationship with James Gordon, not yet commissioner, is under development. Batman and the Monster Men TPB

Wagner’s work has always possessed a nostalgic feel (the 30s inspired Grendel especially) and he is the perfect talent for such a book. Sure, Monster Men is clumsy at times, but Wagner injects Batman’s first genuine monster encounter with a naive Golden Age magic few other than James Robinson (Starman) can capture. Wagner’s art is sentimental but messy, and his character’s features inconsistent at times, but Dave Stewart’s sepier colour scheme, reminiscent of the Timm/Dini animated series, keeps the book cohesive.

Monster Men’s simple noir premise – Batmen investigates a series of mutilations – is invigorating in this time of Infinite Crisis’ multiversal retcons and JLA mind-wipe politics. Free from 60-plus years of continuity Bruce Wayne is a more comprehensible and intriguing character, a driven man who still makes mistakes.

Behind the killings is Hugo Strange, an erstwhile nemesis of Batman who rarely pops ups nowadays, though this earlier incarnation is a slightly more infantile, neurotic foil yet to find his fixation with the Bat. Like any good mad scientist Strange has inadvertently designed a race of superhuman abominations with a taste for blood, and needless to say, he’s using them to settle several old scores.

Other characters, such as Bruce’s early love interest Julie Madison and gangster Sal Maroni (most notable for throwing acid in Harvey Dents face, creating Two-Face) are introduced to newer readers for the first time with a feature film accessibility.

Batman and the Monster Men doesn’t break new ground, but it really doesn’t need to. This revisiting of the caped crusader during his sophomore year compliments Year One with enough personality to be recommendable on its own.