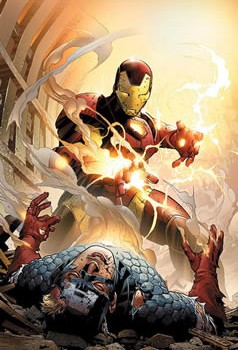 This is an odd volume, occurring both before and after the death of Marvel’s finest, Captain America, but like the Frontlines series it serves as a worthy companion to the main event. The first story, ‘Casualties of War,’ primarily serves as recap of the relationship these two icons have forged through forty-plus years of comics, but is also a quieter companion piece for the ultimately senseless hubabaloo that was Civil War. Though not entirely necessary, it’s executed well enough to be recommended to old fans as well as new.

The middle section sees the two face-off yet again. It’s a little implausible that Iron Man and Captain A should be having frequent secret rendezvous, given the intensity of their feud and the recent death of Goliath. An interesting euthanasia subplot featuring Harold “Happy” Hogan, left in a vegetative coma after a confrontation with Spymaster, the ambiguous conclusion of which will undoubtedly have repercussions in the near future.

Finally, we have the aftermath of Tony’s plight in ‘The Confession.’ Very similar in tone and style to the first story, it bookends Civil War nicely, both proceeding and succeeding the death of Captain America.

These small tales all succeed in vilifying Stark while maintaining his conviction that he’s on the right team. Though his actions during this event may have lost Iron Man some fans (until the 2008 movie) writers Gage, Knaufs and the ubiquitous Bendis depict enough inner conflict to make him redeemable – the same, unfortunately, cannot be said of Reed Richards, who seems to follow Stark without a hint of demur or conscience.

I find it hard to believe that many readers will side with Stark, but this book does possess a level of delicacy rarely found in the Marvel Universe, or indeed the Civil War event.