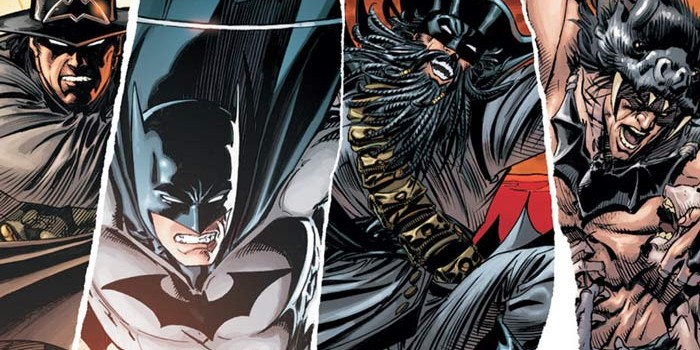 Like Superman and Captain America before him, Batman was always going to best the Grim Reaper and return to the DCU – even though technically he was never dead. It was more a question of when (re: how long DC could resist restoring the status quo) than if. But with Grant Morrison overseeing the Dark Knight’s past, present and future, the results are, unsurprisingly, anything but conventional.

Following the events of Final Crisis, in which Batman was struck with Darkseid’s Omega Beams, Wayne now finds himself hurtling through time, from the Palaeolithic era through to the Wild West and 30’s Gotham; the latter providing Wayne an opportunity to view the aftermath of the Waynes’ murder from another perspective. Anyone who remembers the ludicrous Legends of the Batman action figure range from the 90s will have a good idea of what Wayne’s time-travelling escapades include, as he assumes the mantle of the Bat according to each period’s fashion. Batman: The Return of Bruce Wayne

If it sounds silly, that’s because it is, and not even a superfluous subplot which follows Superman, Booster Gold and Tim Drake as they zip about through DC chronology to prevent Wayne from returning to the present – the consequence of which will tear the timeline asunder – is enough to make The Return of Bruce Wayne feel like anything less than a Batman-restoring deus ex machina. Blue Beetle never received this level of dedication from the DCU’s finest.

Still, there are moments of quality here, and the eclectic assortment of artists (Frazier Irving’s witchfinder confrontation in Puritan America is particularly good) hit the project from every angle possible. Morrison is never short of ideas, and while the plot trips over its entangled shoelaces towards the finale, The Return of Bruce Wayne is at least imaginative, and provides a take on the character that stands out from his 70 years in funny books as something unique, for better or worse. Batman: The Return of Bruce Wayne

One question that the book doesn’t answer, however, is why Bruce Wayne needs to return right now; especially when Morrison’s other Bat-book, the rollicking Batman and Robin, has made such a strong case for the contrary.