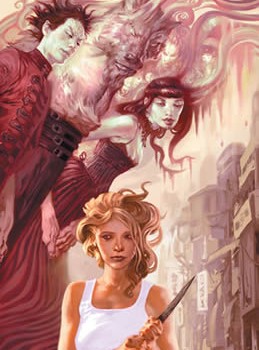 Like the television show before it, Buffy’s season 8 was always going to take time to “get into”; but I can gladly say that Wolves at the Gate is the first volume so far where I didn’t feel the need to compare every minor event of this series to its originator. With the characters, setting and tone all firmly established, Wolves at the Gate not only builds substantially upon the established seasonal arc but is a great read by its own. Buffy the Vampire Slayer Season 8 vol. 3: Wolves at the Gate

When the gang’s Highland sanctuary is invaded by a troupe of annoyingly chic Asian vampires who appear to have nailed Count Dracula’s abilities to shapeshift, they head for Japan with the aid of Nosferatu himself. Cue culture clashes and Eastern-tinted mysticism. Drew Goddard, who has written for the Buffy: the Vampire Slayer show, Alias and Lost, writes this stuff better than either Whedon or Vaughan. His knack for Buffy’s trademark tongue-in-cheek humour is spot on, and frequently laugh-out-loud; Wolves at the Gate had me chuckling more than the two previous volumes combined.

Without a doubt the series’ most impressive aspect so far has been its constituency. Both Goddard and Brian K. Vaughan have carried on from Whedon superlatively, and a visual stability has been provided by Georges Jeanty’s colourful art, used for all but one issue. A giant-sized Dawn’s Godzilla inspired assault on Tokyo really emphasises how the creative team have taken ideas that may not have initially worked – or at least been too alien to primarily appreciate – and brashly run with them until they did. The return of camp Dracula, and his relationship with his former Renfield, Xander, is also handled in a humorously, occasionally touching way and escapes the nostalgic clinginess that the previous villain reappearances have suffered from.

As with No Future for You, Joss Whedon writes but one side episode here, ‘A beautiful Sunset’, in which Buffy has her first encounter with season 8’s enigmatic big bad Twilight, and in true Whedon tradition gets the crap kicked out of her. Though Twilight is still a little too mysterious to be intriguing, Whedon does pull a hilarious parody on the enigmatic villain unmasking that used to fill the final page of almost every superhero comic in the mid-nineties, particularly Liefeld era New Mutants and X-force.

Unfortunately, the series sudden improvement in quality will be overshadowed by the titular vampire slayers sudden and inexplicable lesbian relationship with the cutesy Satsu. Though it might verge on homophobic to argue that Willow and Andrew already fill the series’ gay character quota, Buffy’s sudden shift in sexual preference does not fit in with anything that has been suggested prior. Whether her relationship with Satsu will move beyond the realm of fanboy fantasy is yet to be seen, but for the first time since Angel got canned, it is safe to say that the Buffyverse has risen defiantly from its grave.