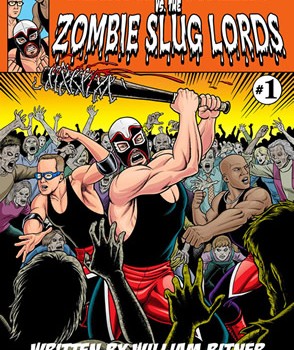 “The Living Dead and the Deadly Living Clash on Charleston’s West Side.” The book, in which a disgraced former masked wrestler battles the walking dead in Charleston’s West Side, is written by authors William Bitner and screenwriter Daniel Boyd, both of whom are professional wrestlers in real life. It’s somewhat unique that they both have experience in this field; most guys who write about muscle-bound superheroes are potbellied, feeble types who were pushed into comics through a deficiency at physical activities. Or so I can only imagine. Illustrations are by twin brothers Brendon and Brian Fraim.

Boyd was responsible for the cult 80s Troma horror Chillers, which should give you some idea of the general tone here. But while Death Falcon sounds like gruesomely quirky fun, the promotional review extracts assure us that it doesn’t disappoint on the guts and brains front either – and I’m not referring to those body parts in the undead party snack sense. The project was originally intended as a Mexican-style wrestling movie, but eventually realised as an illustrated novel, and features both celebrity wrestlers such as WWE members “Luscious” Johnny Valiant, Headshrinker Samu, current European superstar Joe E. Legend and Mexican lucha star Sol de Oriente, as well as local wrestling personalities.

Death Falcon Zero vs. The Zombie Slug Lords is available from Amazon, priced $12.99. 130 pages. Proceeds from book sales go to the Rev. James D. Ealy’s nonprofit New Covenant Community Development, Inc. So by buying the book you’ll not only be helping Death Falcon Zero cleanse Charleston’s streets of fetid scum but aiding others in this grim but thankfully zombie-free world we call reality. More info at www.grapesofwrath.biz.