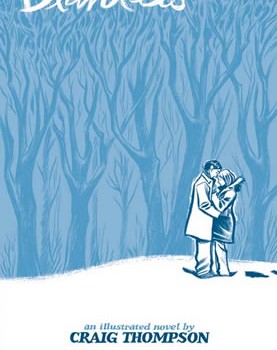 When reading an independent book which I intend to review, I try to refrain from further research until I’ve finished reading. This is partly down to the fact that most indie books don’t require me to swot up on 50 years of Marvel or DC continuity, but also because I believe a good standalone comic book should speak for itself. Only 100 pages into Blankets, I decided that I would do no research whatsoever.  Craig Thompson’s tale of religion, childhood and first love was clearly semi-autobiographical; knowing how heavily weighed in actual events his story was would only undermine my enjoyment of it. At a whopping 600 pages, Blankets is not quite the epic its width may suggest. To the contrary, it’s a small, undeniably quaint meditative on Thompson’s earliest relationships, initially with his parents and younger brother, and his first sexual encounter, with the timid and sensitive Raina (though a disclaimer states that the names of all characters have been altered). The latter, which eventually becomes the focus of the book, begins in an idyllic boy-meets-girl fashion, but ends with an abruptness that is heartless and meaningless, and almost disappointing in its inconclusiveness – until you realise that real life relationships more often end with uncomfortable, insincere  phone calls than they do with horse rides into sunsets.

Blankets is an absolute joy to read. Thompson has a breezy, loose approach to storytelling, and was evidently under no pressure to confine his work to a specific length, as is the way with the majority of mainstream comics, in which ambitious serials are crammed into mere pamphlets. His imagery is likewise sketchy but deceptively deliberate, and when the book occasionally dips into dream sequence imagery, it’s used to far better effect than in Charles Burns’ Black Hole.

One thing Thompson does well is give us horrific yet inconclusive glimpses of his childhood, memories that may or may not have been perverted far beyond the original instances through the subsequent years. One particular incident involving a male babysitter, is particularly uncomfortable, as are elements of Thompson’s strict Christian upbringing, which at one point border on child abuse.

The final chapter of nine, knowingly titled ‘Footnotes,’ does feel extraneous, as our narrator tries to find meaning in that which has none. The book would have ended on a far more affecting note were it excised. In trying to force closure upon his autobiography, Thompson seems to be fighting against everything the rest of Blankets has to say; that the joys of life are to be experienced, rather than painstakingly considered.