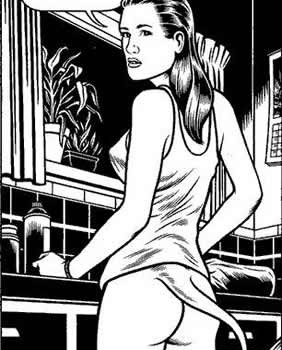 With sequential art being embraced by the literary and art crowds more than ever before, many journalists still feel tempted to excessively praise the indisputably excellent works that are regularly produced in the comic medium by comparing them to the generally lacklustre standards at which much of the comic industry still churns material out. As instrumental to the acceptance of adult comic narratives as Alan Moore’s Watchmen was, it did nothing that had not been done to superior effect in prose or film. Charles Burns’s Black Hole is a perfect example of such positive medium bias. As an indie movie it would have found small praise and earned the sort of loyal fan base that would assure its place as a cult movie. As a graphic novel, its themes of 70s nostalgia and the impetuousness of adolescence elevate it to the status of a classic in its own humble niche, if only because it few other comic creators are plucky enough to enter such territory.

Interestingly, there is little mention made of the plague by either the central characters or the adult residents of the town around them. Only the panic-stricken reaction of potentially infected girl Chris’s mother serves as any indication to the tight-lipped hysteria which filled the town’s parents, and afflicts the mind of any loving parent. Burns never cheapens his powerful allegory by elaborating on whys and wherefores; he is far more interested in the sexual and emotional awakening that threatens to suck in and devour its impulsive vessels. A fitting title, then.

Comparisons have been made to David Lynch, as are almost obligatory when trying to describe something peculiar and difficult to pigeonhole, but minus the plague plot device, this is a relatively simple, straightforward study of adolescent sexual anxieties. Though like a David Lynch film – I’m not above lazy analogies myself – this is a complex piece that warrants multiple readings.

Burns’s artwork is difficult to describe, taking inspiration from everything from the Comix movement to the kitsch of Americana and those crazy drag racing illustrations. Particularly notable is his heavy use of Black, which almost gives the entire book an inverted luminance likable to a photographic negative, which Burns pushes to absorbing effect in the incredibly eerie dream sequences and woodland scenes.

Though this may be largely due to the nine year stretch it took to complete Black Hole, Burns’s narrative isn’t as consistent as his art. I had a problem with the book’s incessant and overbearing narration; his dual protagonists perpetually describe the action within each panel. Its quite unnecessary, as his textually rich art speaks tones by itself. While the plot definitely picks up pace in the latter half, as the narrative concentrates on shy loner Keith, the book’s early chapters tend to meander into grotesque sequences of perverted imagery and emotional bleeding with a disrupting frequency, and a superfluous murder subplot feels tacked on as if to provide conservative suspense.

But most readers will no doubt find these aforementioned “stream of consciousness” scenes – or as close to that approach as the extensive production times of the comic medium will allow – the highlight of Burns’s portrait of an uninhibited 70s American society in cultural flux. While undeniably a superbly crafted work, Black Hole is an acquired taste.

Admittedly, I found it difficult to associate with any of Burns’s lustful cast; though that might have something to do with the fact that while my juvenile brethren were out sampling horse tranquilisers and blindly fumbling their way in and out of bisexualism, I was doing my homework. And boy, am I still bitter about it…