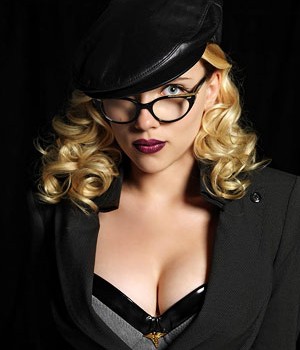 Frank Miller’s directorial debut sees him emulating Rodriguez emulating Miller emulating Will Eisner, in this turgid adaptation of the seminal crime-fighter comic strip. Whereas Sin City glamorised audiences into forgiving its superficiality, a dire script and overbearingly flamboyant visuals bleed The Spirit of any potential charm or wit. The film suffers from a schizophrenic tone, shifting from the urban, chiaroscurist noir of Sin City to the buffoonish camp of Adam West’s Batman – the villainous Octopus’s (Jackson) army of cloned goons even have their rhyming names emblazed across their matching outfits. Gabriel Macht struggles as the stoic, square-jawed hero, as though he can’t decide whether the role’s as an errant klutz or vigilante sociopath. Given the dialogue he is forced to deliver, one can’t blame him. The entire supporting cast embarrass themselves with every line of woefully clumsy dialogue they spew. Samuel L. Jackson, wearing marker pen makeup and sporting an ensemble of increasingly ridiculous outfits and marker pen, can find solace in the fact that he’s achieve the impossible, making his getup in Jumper look positively elegant in comparison.

So what of the plot? Burgeoned by ham fisted allusions to Greek mythology, it really doesn’t warrant any time longer spent on it than Frank Miller spent writing it. That the spirit recounts his origin story – a convoluted mess that completely misses Eisner’s engaging minimalism – to a random alley cat pretty much says it all. The inclusion of the Spirit’s infamous minstrel sidekick Ebony White may have proven controversial, but he would have at least provided a valuable source of exposition.

The visuals, while impressive in moments such as the rooftop chases, are used with the reservation of a group of quarrelling film undergraduates. Miller smothers every hollow scene with so many layers of gloss that the movie often resembles a James Bond title sequence.

The Spirit is a failure by all accounts. What could have been a fun, colourful pastiche of a hero belonging to yesterday is instead a pretentious, soulless homage to nothing in particular. In resurrecting The Spirit for the big screen, Frank Miller has ironically killed the character’s future prospects as well as his own. Expect the various projects associated with his name, including the Buck Rogers revamp, to dissipate as if never were.